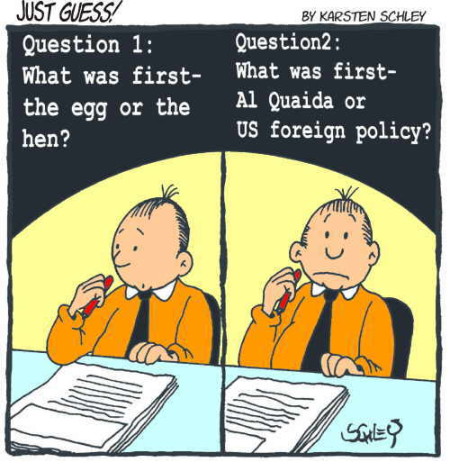 Afghanistan’s “Mujahideen” [is] translated as: “Freedom-Fighters,” or more literally, “People Engaged in Jihad,” or “People Engaged in the Struggle.” […] But, wait! If you’ll recall, this is the same Mujahideen that the CIA trained and funded during the Cold War to fight the Soviets in Afghanistan! The same group that allegedly disbanded after the defeat of the Russians. Hmm… Obviously, there is something a little more complex at work here. Let’s do some research:
http://en.wikipedia.org/wiki/Mujahideen#Afghanistan

“The Mujahideen were significantly financed and armed (and are alleged to have been trained) by the United States Central Intelligence Agency (CIA) during the Carter and Reagan administrations, the government of Saudi Arabia, Zia-ul-Haq’s military regime in Pakistan, Iran, the People’s Republic of China and several Western European countries. The Pakistani Inter-Services Intelligence (ISI) was the interangent used in the majority of these activities to disguise the source of support for the resistance. Under Reagan, U.S. support for the Mujahideen evolved into an official U.S. foreign policy, known as the Reagan Doctrine.”

The CIA’s actions were carried out under the military directives of OPERATION CYCLONE, implemented as policy from 1979-1989 (with bipartisan support – both Carter and Reagan were on-board), and, later, through the executive directives of the Reagan Doctrine:

According to the Wiki:

It is interesting to note that, to this day, OPERATION CYCLONE is still considered “one of the longest and most expensive covert CIA operations ever undertaken.” For more on the Reagan Doctrine, go here:
http://en.wikipedia.org/wiki/Reagan_Doctrine

After joining the Mujahideen, Osama Bin Laden went on to co-found “Maktab Al-Khidamat” (Afghan Services Bureau, or MAK) with Abdullah Azzam in 1984, which was AGAIN indirectly funded by the US:
http://en.wikipedia.org/wiki/Maktab_al-Khadamat

“Maktab Al-Khidamat maintained a close liaison with Pakistani Inter-Services Intelligence (ISI) agency through which the CIA funneled money to Afghan Mujahideen. The MAK paid the airfare for new recruits to be flown into the Afghan region for training.”

Also notice how the article states:

“MAK became the forerunner to Al-Qaeda and was instrumental in creating the fundraising and recruitment network that benefited al-Qaeda during the 1990s.”

Al-Qaeda, a word that means “the base” (apparently, short for “database”) was a name given by the CIA to the list of Mujahideens trained and recruited with the help of the CIA to fight against the Russians during the Cold War. Around 1988-1989 (shortly after Russia began to withdraw from Afghanistan), many of the men on the list began “allegedly” operating independently of CIA direction, and under the direction of Osama Bin Laden – holding highly extreme jihadist ideologies, and looking to expel all foreign troops from Middle-Eastern soil. They were given this title and tied together as a terrorist organization by our intelligence community (aka theCIA), so that members of the list could be tried by our government in their absence (for bombings, and other terrorist activities) in accordance with law. This information can be accessed here:

Bin Laden was tried in this way (in his absence) in 1998 for the bombings of two US Embassies in Africa.

Of course, we must understand another connection between Al-Qaeda and our government: Under Bill Clinton, Al-Qaeda was indirectly funded through our government’s collaboration with Kosovo’s Liberation Army (KLA):

According to the article:

“The KLA members, embraced by the Clinton administration in NATO’s 41-day bombing campaign to bring Yugoslav President Slobodan Milosevic to the bargaining table, were trained in secret camps in Afghanistan, Bosnia-Herzegovina and elsewhere, according to newly obtained intelligence reports.

The reports also show that the KLA has enlisted Islamic terrorists — members of the Mujahideen –as soldiers in its ongoing conflict against Serbia, and that many already have been smuggled into Kosovo to join the fight.”

“The intelligence reports document what is described as a ‘link’ between bin Laden, the fugitive Saudi millionaire, and the KLA –including a common staging area in Tropoje, Albania, a center for Islamic terrorists. The reports said bin Laden’s organization, known as al-Qaeda, has both trained and financially supported the KLA.”

The Crimes of the KLA: Who Will Pay?
http://www.antiwar.com/orig/jatras9.html

As you can see, just like the Mujahideen and the MKA, our government indirectly funded the KNOWN TERRORIST GROUP, Al-Qaeda, in an effort to fight a proxy war against Yugoslavia.

Now, the Taliban, on the other hand, formed in 1994 as a movement bringing peace between previously warring factions of Mujahideen. It evolved into a political party that controlled Afghanistan from 1996 to late 2001 (when our military invaded Afghanistan, along with the British).

As you may have noticed in the earlier Wiki article on the Mujahideen, that after they beat the Soviets:

“[Mujahideen] did not establish a united government, and many of the larger mujahideen groups began to fight each other…After several years of devastating infighting, a village mullah organized a new armed movement with the backing of Pakistan. This movement became known as the Taliban, meaning “students” (in Arabic), and referring to the Saudi-backed RELIGIOUS SCHOOLS known for producing extremism.”

Read about the origin of the Taliban:
http://en.wikipedia.org/wiki/Taliban#Origin

“Some basis for military support of the Taliban was provided when, in the early 1980s, the CIA and the ISI (Pakistan’s Inter-Services Intelligence Agency) provided arms to Afghans resisting the Soviet invasion of Afghanistan, and the ISI assisted the process of gathering radical Muslims from around the world to fight against the Soviets [Mujahideen]. Osama Bin Laden was one of the key players in organizing training camps for the foreign Muslim volunteers. The U.S. poured funds and arms into Afghanistan…by 1987, 65,000 tons of U.S.-made weapons and ammunition a year were entering the war.”

As you can read and connect the dots for yourself, the same Mujahideen that was funded, trained and armed by the US, not became Al Qaeda, but also the MAK, the Taliban, AND the Libyan Islamic Fighting Group… and, this ALL took place around the SAME TIME!

And, let us not forget how these sorts of violent extremists are REALLY created (from YOUTH, and through AMERICAN tax dollars):

According to this article

“In the twilight of the Cold War, the United States spent millions of dollars to supply Afghan schoolchildren with textbooks filled with violent images and militant Islamic teachings, part of covert attempts to spur resistance to the Soviet occupation. The primers, which were filled with talk of jihad and featured drawings of guns, bullets, soldiers and mines, have served since then as the Afghan school system’s core curriculum. Even the Taliban used the American-produced books, though the radical movement scratched out human faces in keeping with its strict fundamentalist code. The textbooks were developed in the early 1980s under an AID grant to the University of Nebraska-Omaha and its Center for Afghanistan Studies. The agency spent $51 million on the university’s education programs in Afghanistan from 1984 to 1994.”