The following article was inspired by my debate, “Celebrating Haitian History in the Face of Opposition“… 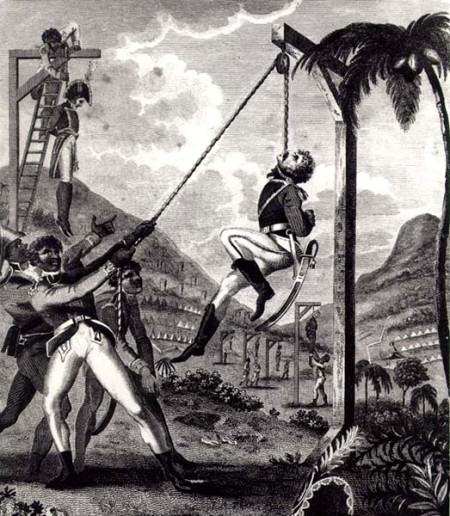 Haitians HAVE A VERY VALID REASON to ABSOLUTELY MISTRUST THE AMERICAN GOVERNMENT. To understand “why,” LOOK NO FURTHER THAN THE ACTIONS OF THE US MILITARY and CIA:

The Overthrow of Haiti’s Democratic Government: A Coup D’etat Made in the USA:
http://www.wsws.org/articles/2004/mar2004/hait-m01.shtml

The 2004 Haitian Coup: An Unresolved Injustice After Five Years:
http://www.seattlemedium.com/News/search/ArchiveContent.asp?NewsID=94686&sID=

What a surprise! In 2004, the US government once again MILITARILY SUBVERTED A SUPPOSED DEMOCRACY in a SOVEREIGN NATION!!!! (For many more examples of overt and covert American imperialism, read my article, “Under Obama, America’s Military Empire Continues to Expand.”)

And, of course, then-President Aristide, who was thrown out, was merely a PUPPET of the CRIMINAL CABAL of SUPER-WEALTHY BANKSTERS, anyway! After an earlier 1990 coup against him, the U.S. military reinstalled Aristide as president in 1994, where he served the rest of his term as, leaving in 1996.

Afterwards, Aristide formed a new party, and ran to win the presidency AGAIN in 2000:
http://en.wikipedia.org/wiki/Jean-Bertrand_Aristide

Keep that in mind when reading the following article:

According to the article:

corrupt Western business people, negligent or complicit bankers and offshore tax havens – all the enablers of corruption, make a lot of money by helping the world’s crooks. And provide the capital for those crooks to stay in power, and they tilt the playing field against the interests of firms and individuals who do business honestly.

The U.S. was involved in the Aristide case in two ways. The offshore system was used to collect kickbacks or divert payments from American companies that should have gone to the Haitian government. U.S. banks moved large amounts of money for shell companies set up in the U.S., Haiti and offshore.”

And, these two instances aren’t the only times the US government and military have meddled in Haiti’s affairs:

That’s right! The US government sent “$750,000 in military aid as well as some troops to help quell” the Famous HAITIAN SLAVE REVOLT against the French that took place in 1791!!! It’s a good thing that it didn’t work out the way America’s government had planned!!

It is also worth noting the fact that the slaves of Haiti had a BETTER IDEA of FREEDOM and LIBERTY THEN America’s so-called “FOUNDING FATHERS”! And, ironically, it was TALK of the French Revolution among the white slave owners that inspired their slaves to embrace freedom and rebel against tyranny! Now, THAT is the beauty and penetrating power of truth! TRUTH can only be limited by pure censorship! Because, once THE LIGHT OF TRUTH IS REVEALED, there ARE NO LIMITS to THE DEPTHS IT WILL REACH and RESONATE in the HEARTS AND MINDS of HUMANITY!

More meddling by the USA:

The Failure of the American Occupation of Haiti, 1915-1934:
http://haitiforever.com/windowsonhaiti/am-occup.htm

I have done much research into the AMERICAN GOVERNMENT’S MILITARY INVOLVEMENT in ALL PORTIONS of the FOREIGN WORLD, and the OVERALL PICTURE IS NOTHING LESS THAN CRIMINAL!!!!! GOOGLE THE FACTS, and begin to UNDERSTAND the AMERICAN GOVERNMENT’S LONG-STANDING TIES WITH THE MILITARY-INDUSTRIAL-SCIENTIFIC COMPLEX, PROMOTION OF DICTATORSHIPS and CORRUPT RULERS IN FOREIGN NATIONS, OPPRESSION, KIDNAPPING, MURDER, GENOCIDE, SLAVE-LABOR, DESTRUCTION of ECONOMY and CULTURE, and OVERALL EUGENICIST POLICIES REGARDING MOST “THIRD WORLD NATIONS”!!!!

To the detriment of the Haitian citizenry, the US GOVERNMENT consistently INSTALLS AMERICAN-CORPORATION-FRIENDLY INTERESTS into the HIGH POSITIONS of the HAITIAN GOVERNMENT!!!!!!! And, AMERICANS ALSO DO NOT BENEFIT from these SWEET-HEART DEALS BETWEEN THIRD-WORLD-NATION DICTATORS and INTERNATIONAL CORPORATIONS BASED IN AMERICA! But, make no mistake, this does not mean that WE, “THE PEOPLE,” will not suffer for the ACTIONS OF THE US GOVERNMENT!!! As the POWERS THAT BE DESTROY AMERICA’S INTERNATIONAL REPUTATION for “LIBERTY” and “FREE-MARKET,” in the end, the EXPERIENCE GAINED BY THESE CRIMINALS will MOST ASSUREDLY be USED TO SUBJUGATE US ALL!!!! Remember: SLAVERY NEVER ENDED!!! It just got OUTSOURCED TO THE THIRD-WORLD!!!!!

Haitians are NOT LOOKING FOR AMERICAN HAND-OUTS! They are LOOKING FOR A WAY OUT… of the AMERICAN GOVERNMENT’S MILITARY-INDUSTRIAL-SCIENTIFIC CROSS-HAIRS!!!!! They have declared FREEDOM from SLAVERY A LONG TIME AGO!!! It is the CORPORATE and GOVERNMENT INTERESTS HAVE IGNORED THEIR WILL!!!

Who knows what be happening in Haiti right now if the nation WAS ALLOWED a LEGITIMATE HAITIAN-BASED FORM OF GOVERNMENT, instead of a PUPPET SHOW, ORCHESTRATED BY THE US MILITARY!!! I can’t say for sure, but I BET OUR GOVERNMENT KNOWS ALL ABOUT IT!!!

And, with BUSH co-coordinating efforts in Haiti after their recent earthquake disaster, we ALL KNOW WHAT IS COMING NEXT!!! HE IS RESPONSIBLE FOR DESTROYING the HAITIAN “DEMOCRACY” in 2004!!! And, AS WE ALL KNOW, HE IS RESPONSIBLE FOR THE FIASCO in NEW ORLEANS after Hurricane Katrina!!!! For more information about the SCOPE of IT ALL, check out this video:

First, Robinson commends Obama for pledging financial support for Haiti, and other such measures. But, as the interview continues, he begins to develop the bigger picture, saying:

“I hope that this experience, this disaster, causes American media to take a keener look at Haiti, at the Haitian people, at their wonderful creativity, at their art, at their culture, and what they’ve had to bear. It has been described to the American people as a problem of their own making. Well, that’s simply not the case. Haiti has been, of course, put upon by outside powers for its whole post-slavery history, from 1804 up until the present.

Of course, PRESIDENT BUSH was responsible for destroying Haitian democracy in 2004, when he and American forces abducted President Aristide and his wife, taking them off to Africa, and they are now in South Africa. PRESIDENT CLINTON has largely sponsored a program of economic development that supports the idea of sweatshops. Haitians in Haiti today make 38 cents an hour. They don’t make a high enough wage to pay for their lunch and transportation to and from work. But this is the kind of economic program that President Clinton has supported. I think that is sad, that these two should be joined in this kind of effort. It sends, I think, the wrong kind of signal.”

CLASSIC DOUBLE-THINK!!! Why WOULD HE SUPPORT OBAMA’S PLEDGE OF AID WHEN OBAMA IS DELIVERING IT TO THE CRIMINALS – BUSH and CLINTON? Could it be that OBAMA is a CRIMINAL, TOO? Not in Robinson’s mind, apparently!!!

As you can see, US GOVERNMENT “LEADERS” will use the CURRENT CRISIS in HAITI as an OPPORTUNITY to USHER in POLICIES that are GEARED TOWARDS CORPORATE and INTERNATIONAL FINANCIAL INTERESTS, and HOSTILE TOWARDS INDIVIDUALS and FREEDOM!!!

In fact, in November 2008, RAHM EMMANUEL, OBAMA’S PICK for CHIEF OF STAFF, said it all when he declared:

“You never want a serious crisis to go to waste.”

Those are SOME VERY TELLING WORDS ABOUT AMERICA’S”LEADERS.” They are NOTHING MORE THAN OPPORTUNISTIC INFECTIONS, FEEDING OFF the SICKLY BODY OF THE WORLD!!!! And, the sickness has always been the same, and is based in the INDIVIDUAL: GROUP-THINK, DOUBLE-THINK, and the OUTSOURCING OF OUR HUMANITY to SOULLESS GOVERNMENT and CORPORATE ENTITIES!!!

Therefore, I WILL NOT BE DIVIDED and CONQUERED! THE OTHER POOR INDIVIDUALS of the WORLD are NOTHING MORE THAN FELLOW HOSTS of the PARASITIC INTERNATIONAL BANKSTERS and BLOOD-SUCKING INTERNATIONAL CORPORATIONS that CONTROL THE ECONOMIES OF THE WORLD! Through words and actions, I SEE EXACTLY WHO MY ENEMY IS! And, my real enemy HATES THE TRUTH, HATES THE INDIVIDUAL, and SEEKS TO DESTROY FREE-WILL using LIES, DECEPTION, SHALLOWNESS, GREED, VIOLENCE, MURDER and other forms of DEATH!