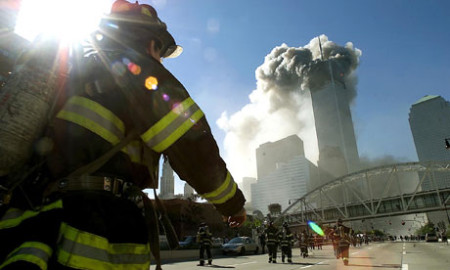 (RussiaToday) – New York’s emergency services were among the first on the scene of the 9/11 disaster but put their personal safety in jeopardy. Those involved in the rescue and clean-up operation quickly became national heroes.

But now 85 per cent of them are suffering from lung diseases which they say were caused by the huge clouds of dust. Those people are now calling on the state for medical support.

So far the US government has refused to help.

My Commentary: Today, I lament the great loss of life on this day in history… I am also saddened by the fact that our gov’t has turned a blind eye to the many WTC first responders & clean-up crewmen now suffering & dying as a result of exposure to deadly toxins at Ground Zero.

For this, we can thank the Bush Administration, along with the EPA, and their head, Christie Whitman, who falsely declared the lead and asbestos-filled air in lower Manhattan as “safe.”