As I scrolled through my Facebook news feed, I discovered the following artwork here, being shared by the page, “All Interactions Should Be Voluntary,” and originally posted it to my own wall, along with commentary… 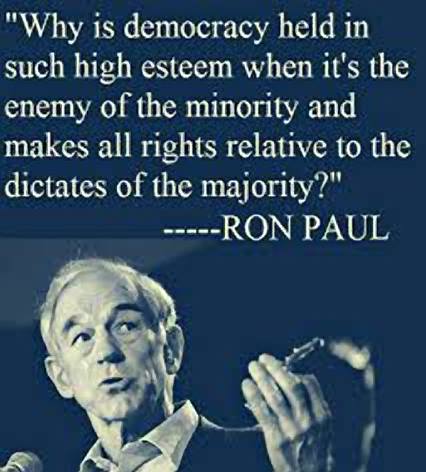 “Why is democracy held in such high esteem when it’s the enemy of the minority and makes all rights relative to the dictates of the majority?” – Ron Paul

My Commentary: Coercive, bully-based politics will surely bring peace and justice to this land! Muh democracy!

(Amy B Wang) At first, Kenneth Walton thought the Arizona state trooper following him and his 7-year-old daughter wanted to warn him of a broken taillight.

They were in a rental car, on a stretch of Interstate 40 between Las Vegas and Flagstaff, Ariz., on what was supposed to be a fun Grand Canyon vacation. It was dark, and Walton knew he hadn’t been speeding, so — not thinking much of it — he pulled over on an off-ramp, rolled down his driver’s side window and waited.

That’s when things went “terribly awry,” according to the San Francisco man’s account of what happened last Thursday.

“Tonight, I was arrested at gunpoint by an Arizona highway patrol officer who threatened to shoot me in the back (twice) in front of my 7-year-old daughter,” Walton wrote on Facebook, hours after the incident. “For a moment, I was certain he was going to kill me for no reason. I’m alive, and I need to share the story.”

My Commentary: Tax-funded terrorism… because, muh “law and order,” and muh “safety.”