As I scrolled through my Facebook news feed, I discovered the following artwork here, being shared by the page, “Just Anarchist Things,” and originally posted it to my own wall, along with commentary… 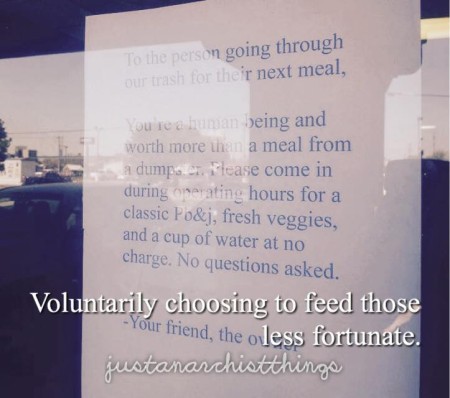 “To the person going through our trash for their next meal,
You’re a human being and worth more than a meal from a dumpster. Please come in during operating hours for a classic Pb&j, fresh veggies, and a cup of water at no charge. No questions asked.
-Your friend, the owner”
Voluntarily choosing to feed those less fortunate. JustAnarchistThings

Many shared the story, but few understood the lesson! Outsourcing our humanity to an ultra-minority of power-hungry “elect” has been a dismal failure for CENTURIES! It is the slave’s answer to being a responsible, respectful Individual.

“No! I don’t want to be peacefully free because criminals will just take over without established authority!“

NEWS FLASH: criminals have ALREADY taken over, and they currently engage in their crimes, almost fully unabated, under the “color of law” that comes from the very established authority you thought would prevent it! Even the mafia couldn’t accomplish such an amazing feat! In reality, the conditions that Statists claim to fear – the ones that keep them clinging so hard to the cult of “government” – are precisely the ones we’ve been in for a very, very long time, already! What they seem to really fear, but rarely admit, is the PERSONAL ACCOUNTABILITY, and the direct participation in shaping society that comes with Individual Sovereignty!

Interestingly enough, at least when common robbers, kidnappers, rapists, and murderers commit their evils, we plainly see their actions as wrong, and fight back, even. But, give these same types State-issued uniforms and weapons, with the free range to abuse their peers that comes with it, and suddenly, and, somehow, their evils magically transform into “jobs,” and they are called “heros.” Even worse: arm them with government titles and pens, and watch even clear-as-day war crimes turn into “collateral damage”! 😉

One Response to True Compassion is Voluntary!