The following is a fully updated version of my two posts, “In the Past Two Weeks, Israel’s Government Has Massacred Nearly 600 Gazan Civilians, Because… Terrorism!,” and “Israel Continues to Commit Crimes Against Humanity in Their Attack Upon the the Residents of the Gaza Strip,” with many new links included at end. Like the previous two articles, I originally posted it to my Facebook wall… 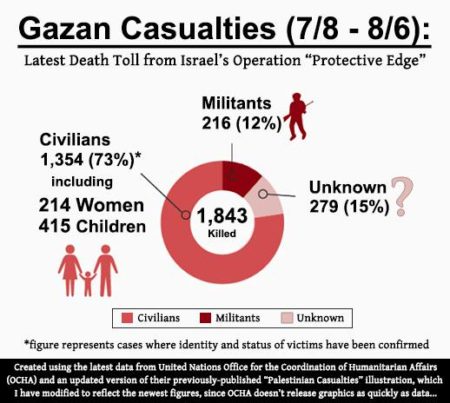 I created this chart using the latest data from United Nations Office for the Coordination of Humanitarian Affairs (OCHA) and a previously-published version of their “Palestinian Casualties” illustration, which I have modified to reflect the newest figures, since OCHA doesn’t release graphics as quickly as data…

According to the latest figures from the United Nations Office for the Coordination of Humanitarian Affairs (OCHA), Israeli military forces have killed an estimated 1,843 Gazans since their July 7th launch of Operation “Protective Edge.” About 73% of this total represents civilian casualties. In other words, approximately 1,354 civilians have been murdered by Israel’s government so far, with about 415 of that total being children, and 214 being women, which together represent 46% of all civilian deaths…

Sadly, these numbers reveal that the world’s “Most Moral Army” continues to snuff out the lives of more children than it is killing Hamas “militants” in its latest war-criminal adventures inside Gaza! Gazan youths represent about one quarter of the Israeli governments total killings, and almost one third of their total civilian murder victims!

Israel’s government is executing a full-scale massacre of purely cowardly proportions – to the welcoming cheers of celebrating Israeli audiences, in some cases!

We’re talking about three murdered Gazan civilians for every one dead Hamas “militant,” with one of those three civilians being a child! That’s the math of straight-up massacre, no matter how Israel’s government and supporters spin it! And, as the UN reported, there is no place for innocent civilians to escape the onslaught of high-tech, American-funded-and-shared-with-Israel weaponry!

In criminal law, the Blackstone Ratio is the principle that “it is better that ten guilty persons escape than that one innocent suffer.” This is closely tied to the “presumption of innocence” inherent to all free and peaceful societies. Anything less than this standard qualifies as oppression and the initiation of aggression against the peaceful. It’s not complicated, nor is it difficult to understand. Those who side with the Accuser against the innocent are the true guilty parties in ALL cases!

To indiscriminately mass murder innocent civilians, including women and children, due to the criminal deeds of a minority segment of a population, in itself, is a criminal deed! And, most of the sovereign nations of the world regard collective punishment against civilian groups as either a crime against humanity, or a war crime!

Israel Attacks Center for Disabled and Mosque in Gaza:
http://www.bostonglobe.com/news/world/2014/07/12/israel-attacks-center-for-disabled-and-mosque-gaza/84fZNajvnJ7h2Q9n1SuhXO/story.html

Much like the terrorist organization, Hamas, Israel’s government clings to the broken logic that terrorizing innocent civilians is a valid political strategy, rather than a crime! For every civilian that Israel’s military murders, Hamas is only given further legitimacy as “just another political party,” simply operating within the framework of the “political reality on the ground” whenever they engage in their own civilian-targeting adventures, just like they’ve been claiming all along…

The irony of the situation is clear: if having one’s civilians targeted for death is just cause to simply murder more civilians, as the Israeli government continues to claim, then by such a pathetic standard, Hamas, much like Israel, suddenly emerges from the equation not as a terrorist group, like most of us thought, but rather, a courageous group of misunderstood heroes simply “defending” their residences and civilians from a decades-long campaign of Israeli government aggression against civilians living within one of the world’s largest open-air refugee prisons. But, it’s a good thing that most don’t subscribe to such an erroneous viewpoint when it comes to Hamas! Yet, the Israeli government’s use of this same rotten reasoning illicits silence from most, and even open encouragement from some!

In his work, “Dissertation on First Principles of Government,” Thomas Paine revealed one of the most important portions of the formula for freedom, writing:

“He that would make his own liberty secure, must guard even his enemy from oppression; for if he violates this duty, he establishes a precedent that will reach to himself.”

When terrorist organizations like Hamas and the Israeli government murder civilians back and forth as some sort of “acceptable” means of achieving their respective political agendas, the moral vacuum created by their wanton disregard for human life threatens to expand and envelop the entirety of humanity, if not properly CHECKED! This is especially true when the escalation leading up to today occurred so incrementally, and with so much compartmentalization, that most are unaware of the originating source of the current conflict.

But, considering the dubious relationship between Israel and Hamas, murdered Gazan civilians seems to be a major goal for BOTH parties, with over 1.5 million innocent Gazan refugees trapped in the middle, to be sacrificed as political pawns!

And, of course, the US has supported and funded much of the Israeli government’s Hamas-helping endeavors…

Besides this, the US government is STILL helping to fund Hamas, at this very moment, through Qatar…

Qatar’s Purchase Of Billions Of US Weaponry — And Support For Hamas — Shows How Awkward Foreign Policy Can Be (July 2014 article):
http://www.businessinsider.com/gaza-conflict-qatar-us-relations-2014-7

And, the US is well aware of Qatar’s position…

And, let us not forget that Hamas sprang from the Muslim Brotherhood, which was funded and fueled by good ol’ Britian and the US of A: