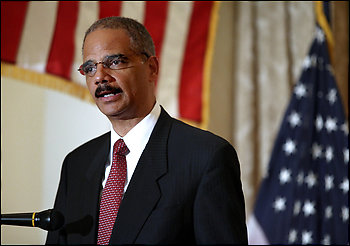 (Carrie Johnson, Julie Tate – Washington Post) Justice Department documents released yesterday offer the fullest account to date of Bush administration interrogation tactics, including previously unacknowledged strategies of slamming a prisoner into a wall and placing an insect near a detainee terrified of bugs.

Authorities said they will not prosecute CIA officers who used harsh interrogation techniques with the department’s legal blessing. But in a carefully worded statement, they left open the possibility that operatives and higher-level administration officials could face jeopardy if they ventured beyond the boundaries drawn by the Bush lawyers.

My Commentary: I am absolutely DISGUSTED by Obama’s proclamation that “YES, WE CAN” protect TORTURERS from criminal PROSECUTION! Regardless of his apologist claims, to put war criminals on trial for the horrors they have engaged in has NOTHING to do with “RETRIBUTION” and EVERYTHING to do with JUSTICE!!! “Nothing will be gained by spending our time and energy laying blame for the past,” Obama claims? How about the fact that it would help put an end to the egregious human rights abuses that are STILL CURRENTLY BEING COMMITTED by the American government as a matter POLICY in the name of the “War on Terrorism,” with full “legal” authorization!?