The following debate originally took place upon the Facebook wall of my friend, Daniel Sv…. 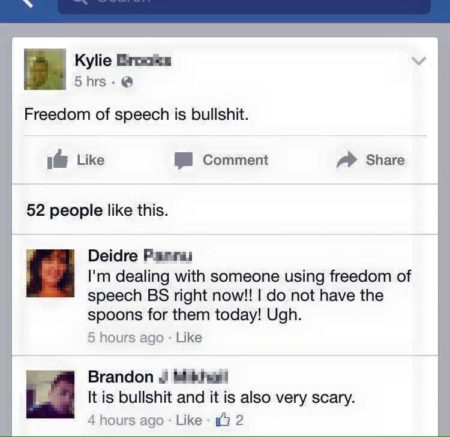 Rayn: Synchronicity. I was just reading this article a few moments ago:

The Coddling of the American Mind:
http://www.theatlantic.com/magazine/archive/2015/09/the-coddling-of-the-american-mind/399356/

For the sake of accuracy, “progressives” should start calling themselves “regressives”! 🙂

Daniel Sv.: What’s scary is how quickly this happened. College 10 years ago was nothing like this.

Rayn: Definitely wasn’t in the late 90’s, either!

Daniel F.: There are just as many right wingers who will go into a frothing rage at anything that even slightly offends their delicate sensibilities. Especially when it involves the false god that they’ve created in their own image that conveniently hates all the same people that they do.

Rayn: You think that’s bad? You should see the how these logically-illiterate, tyrannical Statists wail and gnash their teeth when you offend their god, government, who they’ve created in their own image, that conveniently wants to rob and imprison all of the same people they do! LOL! Boy, is it a sight to see! I tell ya!

Daniel F.: And you have the right to say it. Even if I think you’re completely full of shit.

Rayn: As do you – even if I think you worship Satan’s thorny cock.

Daniel F.: If anything Satan gets a bad rap. There isn’t really much about him in the Jewish bible (what Christians refer to as the “Old Testament”). They just needed something to keep people in line through fear of eternal damnation.

Rayn: His barbed wire pubes probably don’t help his reputation, either – especially, since he’s always asking people to drop to their knees before him…

Daniel F.: Well I wouldn’t know because I’ve never actually seen it, nor do I have any actual desire to do so.

Rayn: Also, Hell much more accurately describes the myth not referenced in Hebrew-Messianic scripture, and used as a tool of fear. Satan is mentioned 15 times in the TaNaKh, and 34 times in the Renewed Covenant.

Rayn: Of course. I would imagine you wouldn’t. The American denomination of Statheism follows after the teachings of the Holy Constitution, written by their old, murderous, elitist, genocidal, slave-mastering prophets. It’s a much more progressive faith-based religion than the ancient variety, because practitioners adhere to the vastly superior teachings of their learned, elect men, and only sacrifice human life, liberty, happiness, and minority groups in the name of empire, wars, consumerism, and eugenics. Very forward-thinking, I say!

Daniel F.: As a True Believer (TM) of your own chosen ideology you apparently project rigid, dogmatic inflexibility onto everyone who disagrees with you. Never mind that your ideology if somehow actually put into practice (never mind the question of how we would enforce the prohibition on the initiation of violence without something that is capable of exerting the necessary force itself) that it would work out horribly for most people – who would be “free” to do what they wished so long as it pleased those who controlled their access to things like food and water and shelter.

Cleopatra – “That is a Slave’s Answer!”:

As a true believer in your own chosen ideology of Statism, YOU project your rigid, dogmatic inflexible, not too mention violent and murderous, tyranny over your fellow man, because you don’t trust anyone but the sociopaths you elect into office, who rob you to live lavishly, while putting innocent human beings in cages for victimless crimes, like possession of non-toxic plants, while bombing women and children, overseas, with the ill-begotten tax funds that take from us all. Calling Voluntaryism, which is the freedom and peace of consensual relations between Sovereign Individuals, “rigid, dogmatic inflexible” ideology completely discredits you, like usual. Keep licking those boots, and eating dust, my friend! 🙂 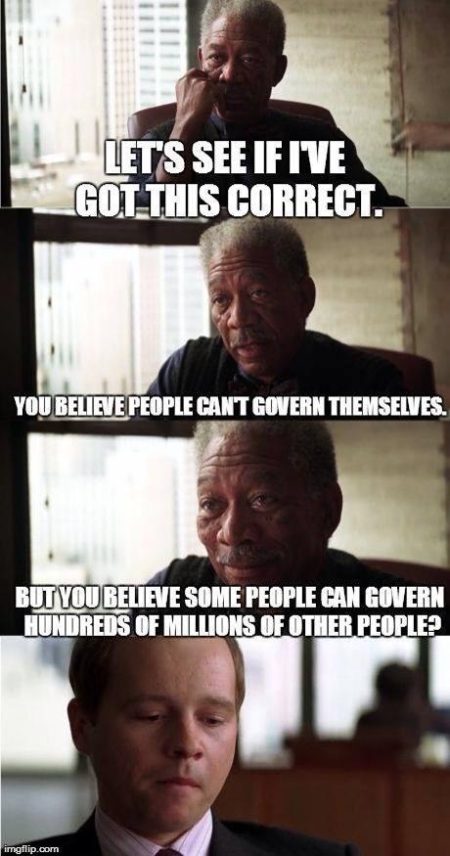 “Let’s see if I’ve got this correct.
You believe people can’t govern themselves.
But, you believe some people can govern hundreds of millions of other people?”
(Artwork originally located here, upon the Facebook page, “Voluntaryism“)

Rayn: “In debates between anarchists and statists, the burden of proof clearly should reset on those who place their trust in the state. Anarchy’s mayhem is wholly conjectural; the state’s mayhem is undeniably, factually horrendous.” – Robert Higgs

“In debates between anarchists and statists, the burden of proof clearly should reston on those who place their trust in the state. Anarchy’s mayhem is wholly conjectural; the state’s mayhem is undeniably, factually horrendous.” – Robert Higgs

Rayn: “Government: the brilliant idea that we should stop lunatics from lying, murdering, and stealing from us by hiring lunatics to lie, murder and steal from us.” 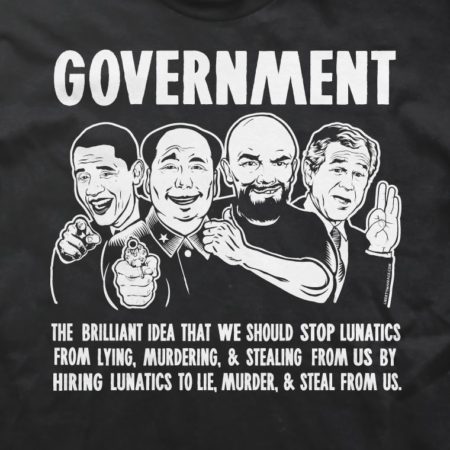 “Government: the brilliant idea that we should stop lunatics from lying, murdering, & stealing from us by hiring lunatics to lie, murder, & steal from us.”
(Artwork originally located here, upon the Facebook page, “LibertyManiacs.com“) 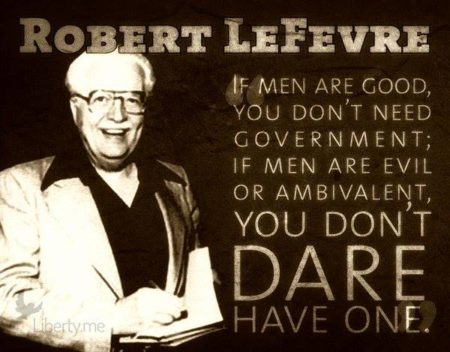 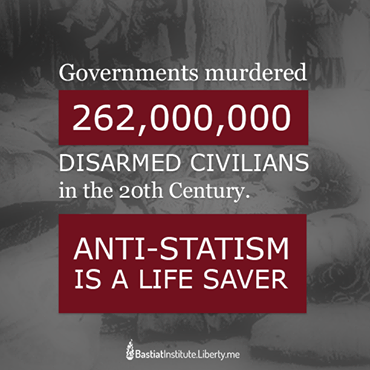 “Anarchism: the radical notion that other people are not your property”
(Artwork originally located here, upon the Facebook page, “The Liberty Principle: No Consent from the Governed“)

“Suspicion is the companion of mean souls, and the bane of all good society.” – Thomas Paine
(Artwork by Rayn, and originally located here)

Dear Boot-Lickers: reality does not tend to agree with your highly cynical notion that humanity needs to be ruled over by morally-bankrupt criminal scum. And, those currently denying my natural right to live, to own myself, and to peacefully co-exist are simply those who wish to violate them, by way of robbery, slavery and/or murder – either directly, or through violent, coercive proxy (church, state, etc). This is typically done while espousing the usual brand of illogical superstition, replete with “original sin/presumed guilt/pre-crime/chaos” myth about the inherent “evil/cruelty/disorder” of humanity. Of course, I reject such cult-like nonsense, as it is absolutely illegitimate. Not only have I personally met more kind and caring souls than I can count, I also recognize every human being as a UNIQUE, SOVEREIGN INDIVIDUAL – to be judged ONLY by the merits of their OWN character! As far as I’m concerned, assigning humanity with labels fit for criminals is merely an excuse for the corrupt and polluted souls among us to collectively oppress and punish us all for crimes we haven’t even committed, in an effort to catch a boogie man that lives no further than the nearest MIRROR! Besides, biology, itself, does NOT support the “freedom is slavery” double-think mentality of such control-freaks, no matter how many clever excuses they come up with in order to justify their lust to harm and enslave others:

The idea that human beings are inherently weak cattle and incapable of running their own lives without the use of coercion is just a MYTH propagated by rotten-souled tyrants who desire to manufacture public consent to their population control schemes. And, the more such stories are repeated as though fact, the more individuals believe it, and act accordingly, denying their own humanity under the notion that others are doing the same – the blind leading the blind, in a most pathetic display of conformism.

Voluntaryism: Because consent should apply to more than just sexual relations!

Daniel F.: Freedom of speech also includes the freedom to tell people who offend you to go fuck off.

Daniel F.: Not exactly a good way to go about making friends though.

One Response to Exposing the Retrogressive Left