Discussing Statism as the Ultimate Cult Religion of Slavery and Murder

The following correspondence originally took place on my Facebook wall, upon my post, “Statism Represents the Ultimate Cult Religion of Slavery and Murder!“… 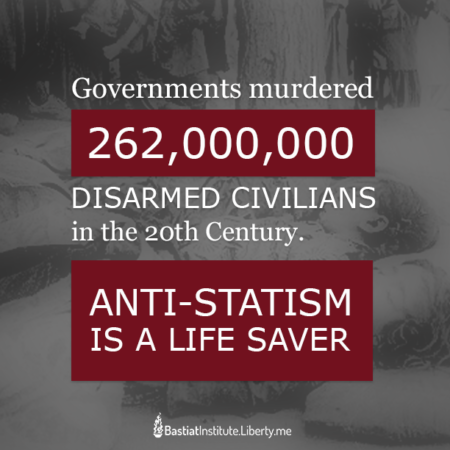 “Governments murdered 262,000,000 disarmed civilians in the 20th Century. Anti-Statism is a life-saver.”

Statism Is Slavery, Statism is a Religion and Statism Is A Cult! It’s time to finally start Unbelieving Statism! 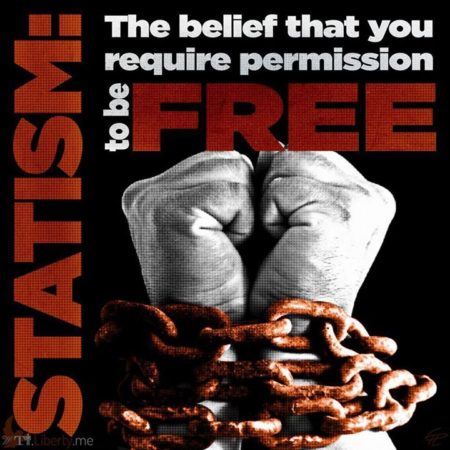 “Statism: the belief that you require permission to be free.”
(Artwork originally located here, upon the Facebook page, “We The Individuals“)

Understand The Liberty Principle: No Consent from the Governed! We the Individuals must accept Voluntaryism and The Non-Aggression Principle, as they truly represent peaceful liberty, which is The Art of Not Being Governed! No Government, Know Peace! 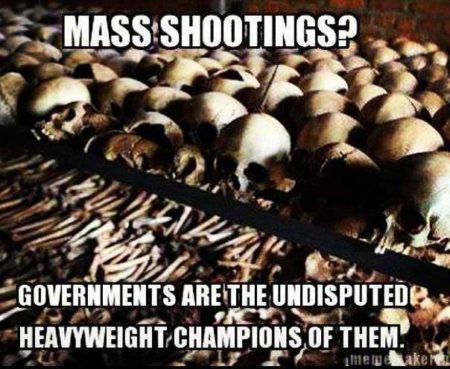 “Mass shootings? Governments are the undisputed heavyweight champions of them.”
(Artwork originally located here, upon the Facebook page, “Rewilding – Anarchism“)

And, please, please, please, DO NOT let horizontal enforcement from the Critical thinking-free majority sway you from following your own conscience, here! Fully Vacate The State with a Vote for Nobody, and you’ll NEVER LOOK BACK! Your “VOTE” represents nothing more than your ACTIVE CONSENT to a system of LIES, THEFT, VIOLENCE, KIDNAPPING, SLAVERY, GENOCIDE and DEATH-WORSHIP, since its VERY INCEPTION! For the sake of your JUSTICE-AND-PEACE-LOVING SOUL, finally, finally, finally SAY NO, already!!!!!!! ENOUGH IS ENOUGH!!!!!!!!!
You’ve Got to Stop Voting:
http://fubarandgrill.org/node/1172

Rebekah P.: I do not, will not, cannot consent worship of the warship