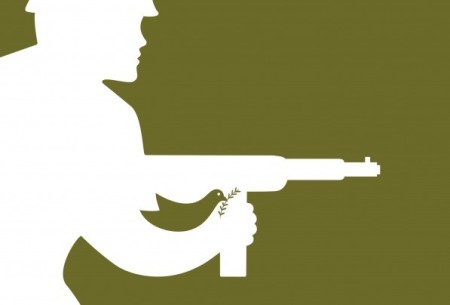 War really IS peace… according to the Washington Post

(Ian Morris, Washington Post) Norman Angell, the Paris editor of Britain’s Daily Mail, was a man who expected to be listened to. Yet even he was astonished by the success of his book “The Great Illusion,” in which he announced that war had put itself out of business. “The day for progress by force has passed,” he explained. From now on, “it will be progress by ideas or not at all.”

He wrote these words in 1910. One politician after another lined up to praise the book. Four years later, the same men started World War I. By 1918, they had killed 15 million people; by 1945, the death toll from two world wars had passed 100 million and a nuclear arms race had begun. In 1983, U.S. war games suggested that an all-out battle with the Soviet Union would kill a billion people — at the time, one human in five — in the first few weeks. And today, a century after the beginning of the Great War, civil war is raging in Syria, tanks are massing on Ukraine’s borders and a fight against terrorism seems to have no end.

So yes, war is hell — but have you considered the alternatives? When looking upon the long run of history, it becomes clear that through 10,000 years of conflict, humanity has created larger, more organized societies that have greatly reduced the risk that their members will die violently. These better organized societies also have created the conditions for higher living standards and economic growth. War has not only made us safer, but richer, too.

My Commentary: Good news, everyone! The world can now breathe a collective sigh of relief! No longer will our lying eyes, ears and hearts deceive us with fantastical tales of “human suffering” within the battle-torn portions of our planet! Because, as it turns out: War IS Peace!!!

That’s right! According to an intellectually-dishonest, pseudo-scientific piece of drivel published last week in the mainstream media monopoly’s Washington Post, empires, imperialism and even murderous wars are all actually beneficial to society because they make us “safer and richer,” in “the long run”! Hooray for progress!

(Can you say… human sacrifice?)

Oh, and in other news, freedom is slavery because liberty only leads to ineffectual instability, chaos and warlords (unlike government, which provides us with a fully-efficient imperialistic war apparatus, along with the real and enduring “peace” of perpetual war)! And, of course, ignorance is strength because it solidly unifies us into the largest, most manageable, most programmable blob of collectivist excrement possible, keeping “dangerous” liberty at bay, while assuring that only the most “wise” and “noble” are able to “rule” over the rest of us!

(Notice how the religion of Statism is replete with hallmark signatures of cultism, including the practice of ritual murder as a matter of policy, and propagation of the age-old “original sin” myth, wherein the species is arrogantly accused of having no self-control, in order to convince us all that we “need” a minority of elitist, criminal sociopaths to control our lives, from the top down, in what could only be described as a gigantic social pyramid scheme of death and destruction…)