Google “Democide” for One of Life’s Most Important Lessons! 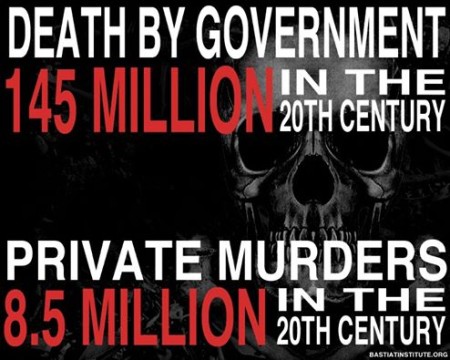 My Commentary: Google “Democide” to understand this illustration. Then, realize that the numbers shown here are actually outdated, as the first figure has been readjusted by two separate sources to be over 200 million dead:

As more investigation is done, I’m sure that both stats will continue to climb, since the margin of error leans largely towards overall underestimation. However, the enormous discrepancy between the two numbers will remain largely the same!

As you can see, humanity cannot empower liars, thieves and murderers to protect us from liars, thieves, and murderers! The very notion that we ever could do so is completely ILLOGICAL! Enabling governments to have a legal monopoly on the use of violent force under the pretext of “protecting” their “citizens” is oldest and most effective recipe for mass murder!

One Response to Google “Democide” for One of Life’s Most Important Lessons!