Gun Control Certainly DOES Kill… And, Apparently, Logic is the First Victim! 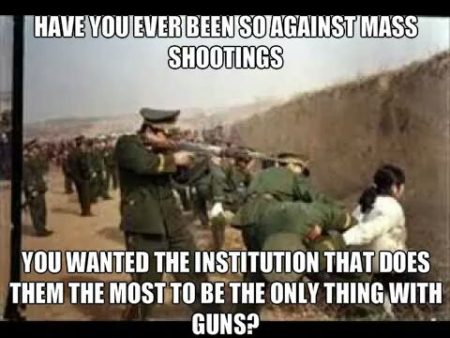 “Have you ever been so against mass shootings…
You wanted the institution that does them the most to be the only thing with guns?”

(And, you’re definitely a boot-licking cop-sucker…)

GOVERNMENT: Shaping Black Markets, then Cornering Them Under “Color of Law,” Since Inception!
http://acidrayn.com/2014/09/05/government-shaping-black-markets-then-cornering-them-under-color-of-law-since-inception/

Google “Democide” for One of Life’s Most Important Lessons!
http://acidrayn.com/2012/11/13/google-democide-for-one-of-lifes-most-important-lessons/

Aaron F.: “YOU RACIST STATIST!” ~ the battle cry of the very uneducated AnCom

Rayn: LOL! Nice strawman fallacy… But, in reality, I merely provided evidence that *GUN CONTROL* has racist roots. However, I guess it’s much easier for you to use your imagination to create my position, and engage in a smug, masturbatory debate with yourself, than to actually address my REAL ones.

Since you’re perhaps either confused, or merely an intellectually dishonest manipulator, allow me to rework your straw-man fallacy into something more legitimately close to my position:

KLM: You’re definitely uneducated, and for the record, the only people who bitch and whine about MUH STATISTS are filthy anarchist pieces of shit. GTFO, commie.

Aaron F.:I am not a gun control adovacate. I’m very pro gun and pro 2A. What I was addressing is that when you shout “racist” or “statist,” it immediately makes you look like an AnCom and makes your argument lose traction. Also, jumping straight to muh “strawman fallacy” makes you look even less intelligent. Please define for me what a strawman fallacy is without googling it. I was addressing the foolishness of your initial name calling, not your point itself.

Rayn: KL, I’m not “uneducated,” I’m not a “commie,” I’m not a “piece of shit,” and I definitely didn’t “bitch and whine about MUH STATISTS,” you arrogant, presumptuous, argument-free troller. I merely exposed the faulty, inconsistent “logic” behind alleged “gun control,” including fallacious appeals to authority, and doublethink. Go sell your ad hominem attacks to someone buying them as legitimate forms of argument, or discussion. In conclusion, make me “GTFO,” armchair tough guy. LOL!

Rayn: Aaron, I never shouted “RACIST.” That was you, framing my argument for me. I ALREADY weaved the definition of strawman argument into my original response, so I’ll simply cut and paste from there:

“I guess it’s much easier for you to use your imagination to create my position, and engage in a smug, masturbatory debate with yourself, than to actually address my REAL ones.”

Pointing out your fallacious reasoning is not even close to a sign of “look[ing] less intelligent.” except to the logically illiterate. Please, continue with your intellectually dishonest attempts to discredit my positions without actually addressing them! You’re on a roll, now! Perhaps you and KLM believe that you can horizontally enforce me into silence with false claims about my position, while avoiding my actual position, and immediately relying upon the ad hominem fallacy of calling me names, instead, but you’re only discrediting yourselves, and exposing your naked aggression, and inability to engage in legitimate discussion, with your emotionally-charged “reactions.” If this is your idea of what “intelligence” looks like, then I take it as a badge of honor to be called “foolish.”

I didn’t intitially engage in “name calling,” in my first post. In the beginning of my comment, I merely stated the truth that gun control has racist origins, and relies almost exclusively upon a false appeal to the mythology of an infallible State authority – the likes of which just happens to be the biggest mass murderers in human history, interestingly enough.

Rayn: Get it all in, guys! This is gonna be a great post on the “debates” section of my website! 🙂 Hmm… I think I’ll call it… “Gun Control Certainly Does Kill… And, Logic is the First Victim!”