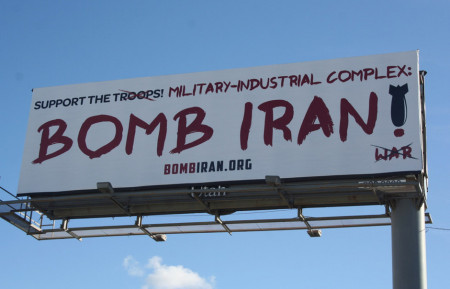 An Attack on Iran Would Be Illegal. What Does the Media Say?:
http://www.newsunspun.org/article/an-attack-on-iran-would-be-illegal-what-does-the-media-say

The ‘option’ of a military attack on Iran by Israel, the UK and the US has been increasingly discussed in the UK media since 2011.

Government threats of military action have come in various forms, with Israel warning of potential air strikes against Iran in the next few months, and Obama and Cameron stating that ‘no options are off the table’.

This is combined with what could at best be described as ambiguous reporting on Iran’s nuclear programme, at times baselessly claiming that Iran has nuclear weapons, and, at others, relying on repetition of snippets like ‘the US and its allies believe Iran is trying to develop nuclear weapons – a charge Iran denies.’

My Commentary: While y’all were busy drinking the mainstream media kool-aid, your last few presidents were committing war crimes [and crimes against peace].