Want a Free Pass to Rape Women Without Fear of Prosecution? Become a Cop! 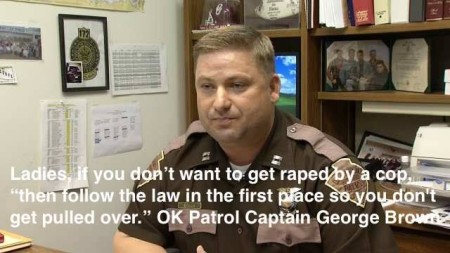 (Joseph Mayton, Daily Beast) On Thursday, a Los Angeles County sheriff’s deputy pleaded no contest to rape and sexual assault of two women. Jose Rigaberto Sanchez, 29, faces a sentence of eight years and eight months in prison and must register as a sex offender, according the district attorney’s office.

Both crimes occurred in September 2010. The first incident included the forcible sodomizing of a 24-year-old woman in Palmdale after Sanchez offered her sex in exchange for not arresting her. He took her to a desert where the crime occurred.

Two nights later, Sanchez pulled over a 36-year-old woman on drunk driving suspicion and attempted to bribe her with sexual favors, according to the Los Angeles Country district attorney’s office.

This is only one of several recent cases of sexual violence where a police officer has been accused or convicted of abusing his power and authority to abuse women while on the job. In January 2012, a Milwaukee jury convicted a policeman of violating the civil rights of a woman by raping her. In November 2013, a Texas police officer was accused of raping a 19-year-old woman. And earlier this month a sheriff’s deputy in Oklahoma was arrested on suspected rape charges at a nursing home.

My Commentary: But, without government, who would tax-fund rapists, while providing them with the “color of law” needed to “legally” detain and isolate their victims, even in daylight hours, without arousing even the slightest suspicion about their intentions and activities?

One Response to Want a Free Pass to Rape Women Without Fear of Prosecution? Become a Cop!