The following correspondence originally took place on my Facebook wall, upon my post, “Silence in the Face of Tyranny is the Answer of a Slave“…

Rayn: Silence? “That is a slave’s answer!” 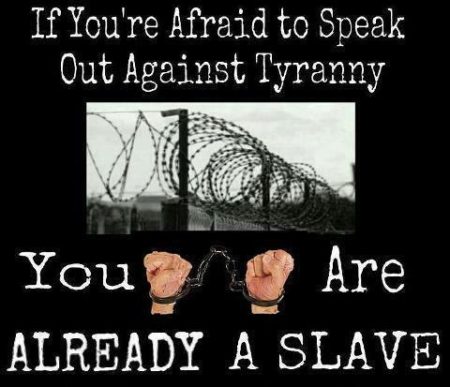 “If You’re Afraid to Speak Out Against Tyranny, You Are ALREADY A SLAVE”

Renat S.: What about stoicism?

Rayn: Being “afraid to speak” isn’t stoicism, as far as I can tell. 🙂

Renat S.: being afraid isn’t always the only reason of silence

Rayn: Absolutely. The statement in the above graphic is simply an “if-then” logic clause. It pertains only to situations of silence based on fear. In the reality outside of the exclusionary “if” referenced here, there are many other reasons for not speaking. Some are philosophical, such as the stoicism you previously mentioned, while others are physical, as is the case with deaf mutes. 🙂