Nazis Were the First to Fluoridate Human Water Supplies

The following article was inspired by my correspondence, “Discussing Nazi Invention of Fluoridating Human Water Supplies“… 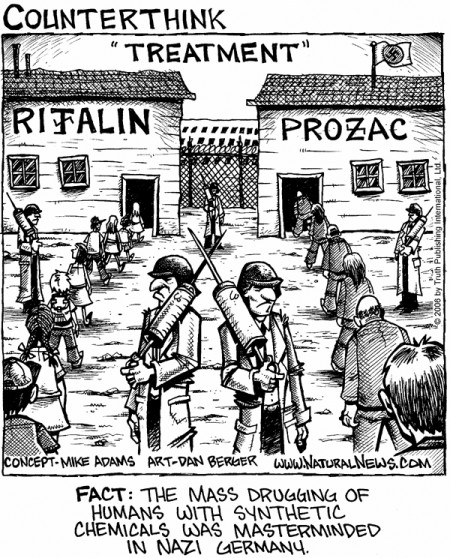 Historically, the Nazis were the first to adopt the idea of mass-fluoridating human beings through their own water supply, and was soon after seized upon by Communist Russia, as well! And, in both cases, the main motivation for doing was to keep their large quantity of victims more docile, and hence, more easily controlled, while also sterilizing them!

The following is an excerpt from the book, “Your Health, Your Sanity in the Age of Treason,” by Dr. R. Swinburne Clymer, which published portions of a letter written by whistle-blower, Charles E. Perkins:
http://babel.hathitrust.org/cgi/pt?id=mdp.39015068642217;seq=202;view=1up;num=196

“A letter of information having wide circulation and for which we have the writer’s personal permission to quote, is of paramount importance and will answer the many who have
requested us to supply them with information on the subject. Charles Eliot Perkins, a research worker in chemistry, bio-chemistry, physiology and pathology, according to his own statement, was sent by the United States Government to help take charge of the I. G. Farben chemical plants in Germany at the end of the second world war. What follows are quotations from a letter which Mr. Perkins wrote to Lee Foundation for Nutritional Research, Milwaukee, Wisconsin, dated October 2, 1954. Mr. Perkins has personally given us permission to use the contents of this letter…”

Dr. Clymer continues on, quoting the following pertinent information from his copy of Dr. Perkins’ letter:

“I have your letter of September 29 asking for further documentation regarding a statement made in my book THE TRUTH ABOUT WATER FLUORIDATION to the effect that the idea of water fluoridation was brought to England from Russia by the Russian Communist Kreminoff.

“The German chemists worked out a very ingenious and far-reaching plan of mass control which was submitted to and adopted by the German General Staff. This plan was to control the population in any given area through mass medication of drinking water supplies. By this method they could control the population of whole areas, reduce population by water medication that would produce sterility in the women and so on. In this scheme of mass control, sodium fluoride occupied a prominent place.

“We are told by the ideologists who are advocating the fluorination of water supplies in this country that their purpose is to reduce the incidence of tooth decay in children, and it is the plausibility of this excuse, plus the prominence of those who are responsible for the present spread of artificial water fluoridation in this country.

“However—and I want to make this very definite and very positive—the real reason behind fluorination is not to benefit children’s teeth. If this were the real reason there are many ways in which it could be done that are much easier, cheaper and far more effective. The real purpose behind water fluoridation is to reduce the resistance of the masses to domination and control and loss of liberty…

“In the rear occiput of the left lobe of the brain there is a small area of brain tissue that is responsible for the individual’s power to resist domination. Repeated doses of infinitesimal amounts of fluorine will in time gradually reduce the individual’s power to resist domination by slowly poisoning and narcotizing this area of brain tissue and make him submissive to the will of those who wish to govern him…

“When the Nazis, under Hitler, decided to go into Poland … the German Staff and the Russian General Staff exchanged scientific and military ideas and personnel, and the scheme of mass control through water medication was seized upon by the Russian Communists because it fitted ideally into their plan to communize the world…

“I say this with all of the earnestness and sincerity of a scientist who has spent nearly 20 years’ research into the chemistry, biochemistry, physiology and pathology of fluorine—any person who drinks artificially fluorinated water for a period of one year or more will never again be the same person, mentally or physically.”

Charles Perkins’ letter is also cited in the 1972 book, “Fluoridation and Lawlessness : the Psycho-Politics of Socialism, Subversion and Schizophrenia,” published by Australia’s Committee for Mental Health and National Security.

In his 1987 self-published booklet, “The Dickinson Statement: A Mind-Boggling Thesis,” author Ian Stephens relays the story of Mr. Harley Rivers Dickinson, a Liberal Party Member of the Australia’s Victorian Legislative Assembly. That year, Dickinson had submitted a statement before the Victorian Hansard, entitled “Address in Reply to the Governor’s Speech to Parliament.” Within it, he also quoted significant portions of Charles Perkins’ letter, while connecting some of the dots between key players in the chemical industry, the dental association, and the practice of water fluoridation. It was re-published in August-September 1995 issue of NEXUS magazine, under the following title:

The testimony of whistle-blower Charles E. Perkins regarding Nazi and Russian fluoridation efforts as a form of population control should actually come as no surprise at all, considering the fact that 24 IG Farben directors were charge with war crimes after World War II. And, 13 of these men were found GUILTY with acts ranging from “plunder and spoliation,” to “enslavement,” to “mass murder”!

After being receiving ridiculously light for their crimes, and serving even less time than that, 11 of IG Farben’s 13 guilty war criminals had no problem finding employment! Based on their previous “work experience,” the vast majority of these men were hired to high-ranking positions within some of the largest companies in Germany! And, of course, most of the corporations that did so were in the business of chemical, steel, synthetic rubber and other forms of manufacturing!

Sadly, the war crimes and war-profiteering of IG Farben did not represent an isolated instance of Nazi collaboration. Many other companies were involved, as well:

As I wrote in my article, “Banking with Hitler – Treasonous Allied Bankster“:

Allied nations worked hand-in-hand with the Third Reich before and during WWII, and banksters working at the Bank of England not only secretly financed Hitler with loans while Europe was being invaded, and England was being bombed, but they also leaked valuable intelligence to the Third Reich, directly resulting in the deaths of Allied forces! Besides this, while the US was still at peace with Germany, American-owned Chase Bank in Paris eagerly collaborated with the Nazis and took measures to seize the bank accounts and assets of their Jewish customers!

Though it is hard to even imagine, Nazi collaboration didn’t end with World War II! After the Third Reich was defeated, some of the most powerful Allied nations – including the American government – provided many Nazis with a safe-haven, jobs and government research funding after WWII. This was apparently done in an effort to pilfer the higher technologies in development, and employed, by the Nazi regime!

Of course, the US government’s claims that this was done to prevent the USSR from gaining access to these war criminals, and their technology, are LUDICROUS, as most of the Nazis that the American government so expertly shielded from prosecution should have been standing alongside their cohorts as defendants at the Nuremberg trials! Besides this, as I already noted earlier, U.S. High Commissioner in Germany, John McCloy, OPENLY granted IG Farben war criminal, Walther Dürrfeld, amnesty after he had served only three years of his meager eight-year prison sentence for “enslavement” and “mass murder”!

Nazi Eugenics: Made in America

Meanwhile, Hitler got many of his GREATEST eugenicist ideas about isolating, sterilizing and murdering “undesirables” from America!

Eugenics and the Nazis — the California Connection:
http://www.sfgate.com/cgi-bin/article.cgi?file=%2Fchronicle%2Farchive%2F2003%2F11%2F09%2FING9C2QSKB1.DTL

These sorts of concepts were being fine-tuned by intellectually-elitist control-freaks at places like Cold Spring Harbor laboratory, then promptly instituted legally in this country for over half a century!

Of course, this leads to the obvious question: why has the practice of water fluoridation become so popular in America since World War II?