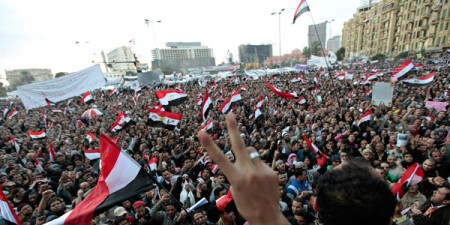 Morgan S.: I don’t think its Democracy they want. I think it is just their freedoms and possibly the Muslim Brotherhood will take control. but our or what we call freedom is not or may not be what they have in mind.”

Rayn: You may be correct, Morgan, but there is a great deal of chatter on the underground circuit about Mohamed Elbaradei, and his recent attempts to hijack the Egyptian Revolution, with the backing of the elite globalist control-freaks.Mohamed ElBaradei: Globalist Pied Piper Of The Egyptian Revolt:http://www.prisonplanet.com/mohamed-elbaradei-globalist-pied-piper-of-the-egyptian-revolt.htmlGlobalist Stooge ElBaradei Prepares To Hijack Egyptian Revolution:http://www.prisonplanet.com/globalist-stooge-elbaradei-prepares-to-hijack-egyptian-revolution.html

Madeline F.: I think Anderson Cooper has been doing a great job, too.

Rayn: I haven’t been following Anderson Cooper. I don’t trust him at all. He’s got “actor” written all over his face. I did see a few headlines reporting that he got punched in the head by Pro-Mubarak forces. Is that what you’re referring to, Madeline?

Madeline F.: I was referring to his overall reportage. I always think he’s a consummate professional with a conscience. What make you feel he’s an “actor?”. Do you know anything about his background that I may have missed?

Rayn: His face tells me he’s an actor. To me, he’s simply not believable as the “regular person” he presents himself to be. There is something very “manufactured” about him.I’ve been reading about Anderson Cooper’s background for this last hour, and have discovered the following facts: