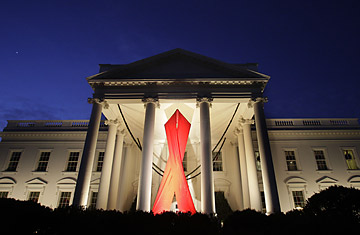 “Our rates are higher than West Africa,” said Shannon L. Hader, director of the District’s HIV/AIDS Administration, who once led the Federal Centers for Disease Control and Prevention’s work in Zimbabwe. “They’re on par with Uganda and some parts of Kenya.”

Kelli C.: smh. Not only are American women desperate but American men are also taking any piece of tail offered. No one is honest anymore.

Cecily M.: I’d say this: “Yes, American women just may be that desperate.”But, it’s not for the reasons that many people think. For one, statistically, 7% of the HIV cases in DC are males (heterosexual(?)) and 3% are African American women. So, we can stand to reason that its not the women who are desperate.

But even with that said, in other cultures, by a certain age, women are married. It’s like another portion of your life. Here in America, because of the inadequacy of many of our black men, black women are taking incentives and working and doing and becoming the breadwinners. That being said, they have little time to focus on settling down and being married. Even those in relationships are often needing to do something to help supplement it.

But at a certain point in time, after you have everything – the home, the car, the great job, but no man, you look to do what all women are supposed to do – get married.

Cecily M.: You look to get married. But now, you have so much going for you, that a great amount of the men you could get with are knocked out. The set that you want to be with probably already have someone. And what’s left for you… just a few good (good meaning possess the criteria that you want in a man, not the criteria that you decide to settle for) men. And all the women want them.

You almost don’t have a choice but to use desperation. Or, you can just get with whatever else is left! And what choices are those?

Gabriel A.: Interesting comments. With the stats that were made public about DC’s AIDS population, I’ve heard people say, “Abstinence”. For years, many have been pushing this and I don’t see it working. It does for a few, but now many. We need to educate our people on protection. Asking for your partner to use a condom doesn’t mean “I don’t trust you.” It means “I love myself too much to take that kind of risk.”

I see former students and I tell them frankly, Say no to sex, but if you don’t please use a condom, cause I don’t wanna go to your funeral. We have to be real and frank with everyone. This is for young, old, married & single.

On the other hand, having sex doesn’t mean you love me. We also need to educate on the difference between love and lust. Sex is going around like the common cold. Hence AIDS and other STDs are also as is pregnancy and single parent households.

Education needs to be more than just the surface. It needs to dig deep.

Kelli C.: the rate is high because of dishonesty, not taking proper precautions, and people not really believing that they can get stds so they have unprotected sex. Oh, and rape.

Stacey J.: Yes American women are toooo desperate for Prince Charming! There is a lot of pressure in American society/culture to get married, get an education, have children, have a great job; and be happy all at the same time. We sleep with all sorts of men and many of them are not worthy of our bodies. Or we try to make a man and when we finally make him he leaves us. The end result is that we get hurt and start another relationship/sleep with another loser. We are too desperate! This puts us in danger of catching any and everything. Then we just cannot accept the fact that we are sick with a deadly disease. There are other ways for women to find happiness and when we do, within ourselves, then love will come. Be safe woman!

“The study found that three in five DC residents who had connections in neighborhoods with high poverty and AIDS rates were aware of their HIV status and that three in 10 had used a condom the last time they had sex, among other findings.”

The above statistics implicate ignorance as the true disease at work here – typically symptomatic of a much more impairing, underlying social ailment: POVERTY.

When human beings are consistently deprived of the basic necessities of life, all else often becomes meaningless.

Maybe it’s time to adapt a new saying: “You cannot teach a starving man to fish ’til he has first been fed.”

LaFese C.: This is just crazy. I was surprised to hear that DC had beat out Baltimore! For them to say its an epidemic WHOA! I had to say that real quick now I need to read all comments.

Doris D.: Just throwing a little wrench into all this: I’ve heard that statistics can be very skewed. I do think we need to question who’s taking these stats and how are they taking them. Obviously the numbers have to come from a sample. Who comprises this sample, etc? Albeit, HIV/AIDS is a huge problem in this country. It’s debilitating and can be viewed as a form of genocide.
Statistics aside though, I think just saying desperation is the reason is a bit short sighted. As natives and descendants of Africans, we’ve been deprived of many things. We still have a colonized attitude about who we are and what we’re worth. Ignorance: self-imposed and taught (yes, I do believe you can teach ignorance to others) is the main culprit. There are some out there who have the information and still don’t care. But I categorize those as the ones who are still buying into the lack of self worth phenomenon. And I do think it’s a phenomenon because it’s extraordinary that we value ourselves and lives so little.

Doris D.: All other ignorance stems from a cycle of misinformation, miseducation, and fear. How many people can sit down and have a candid talk about sex with their parents? Even to this day, in my 27th year of life on this planet, that is something that I don’t see ever happening. I also think the
Black church is exemplifying an awful attitude of ignorance. The message in church has become somewhat archaic and not in tune with the times. Sure, preaching abstinence and waiting until marriage should still be conveyed. However, we must own up to what’s going on in our world today. We need to realize that saving lives by preaching safe sex is not contradictory to God’s overall message. We can talk about severely egregious acts like murder and slavery in the Bible. But we’re afraid to save ourselves and our children because of holier than thou attitudes.
Another thing. It’s no surprise that DC’s rate of new HIV/AIDS cases is on the rise.

Doris D.: Do we have the same representation in Congress as other states? Do we have the same support with legislation? DC has a lot of social agencies and I think that’s because we lack assistance in other arenas.
Also, DC is such a transient city. People come, people go, people use and people leave things behind. The native population is marginalized and almost segregated in some instances. I’ve volunteered in a school in SE (not to pick on SE cause it gets a bad rep already) and have spoken with the students and was surprised to learn that some of them don’t ever even leave SE. They go to NW and ask if they’re still in DC!
I can go on and on and on. But I do think it’s up to us to change things. I don’t yet know how. But I do believe that the situation will work itself out in one way or another. Either we fix it or it will break us. In either case, equilibrium will be reached at some point. Hopefully, it’s not in the form of extinction.

Patricia S.: I just have a comment to add to this discussion…

In my opinion a percentage of the population is not properly educated or informed about HIV/AIDS. I feel that people she take an initiative in educating themselves and not rely on society or schools or whomever to educate them. Thanks for reading my comment.