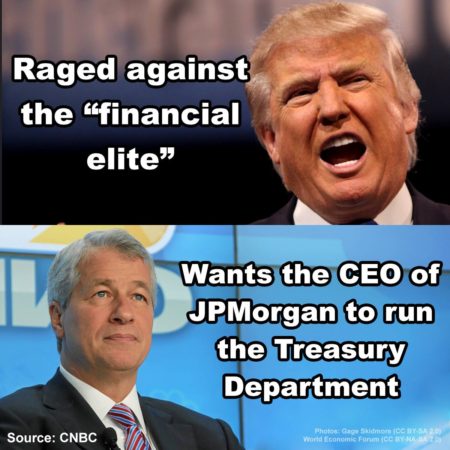 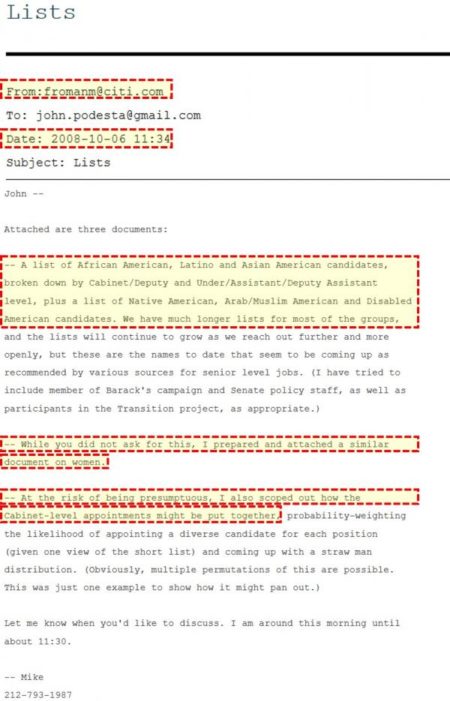 “The Most Important WikiLeak” – How Wall Street Built The Obama Cabinet:
http://www.zerohedge.com/news/2016-10-14/most-important-wikileak-how-wall-street-built-obama-cabinet

Perhaps the most startling discovery of the WikiLeaks dumps so far didn’t come from the most recent emails surrounding the various Hillary scandals, though there are many great ones, but from 2008 when John Podesta served as co-chair of President-elect Barack Obama’s transition team.  The email came from Michael Froman, a former Citibank executive, who single-handedly built the entire cabinet of what was supposed to be the “main street” President.

The email in question was even sent from Froman’s Citibank email address (rookie!) and includes “A list of African American, Latino and Asian American candidates, broken down by Cabinet/Deputy and Under/Assistant/Deputy Assistant level, plus a list of Native American, Arab/Muslim American and Disabled American candidates.”

Apparently Obama wasn’t as worried about placing women in senior-level positions but Froman decided to offer up some suggestions anyway.

“Michael Froman, a former Citibank executive… single-handedly built the entire cabinet of what was supposed to be the ‘main street’ President” Obama…”

When I called Obama out as a war-mongering, bought-and-sold, corporate puppet after his selection – whoops, I mean “election,” as president, I was often treated as overly-cynical, and misinformed. The more ignorant among his supporters even had the nerve to tell me that I needed to give the the lizard a “chance” to prove himself – as though he hadn’t already done so many, many times over – even while on the campaign trail… LOL!

Just face it, already… The criminals long-ago adapted to your weak and pathetic system of “justice” known as “government,” but most of y’all are just too blind and arrogant to admit it…

I’ll share some of my MANY articles on this topic, starting with this one…

Is Obama “One of Us,” or is He Just Another Rich Puppet, Serving Corporate Masters?
http://acidrayn.com/2009/08/10/is-obama-one-of-us-or-is-he-just-another-rich-puppet-serving-corporate-masters/ (Click Here to Continue Reading This Post) →