As I scrolled through my Facebook news feed, I discovered the following artwork here, being shared by the page, “Anarchista Musings,” and originally posted it to my own wall, along with commentary… 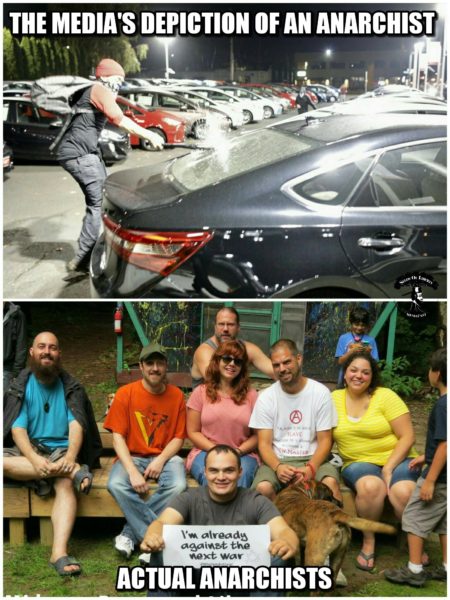 “The media’s depiction of an anarchist
Actual anarchists”

My Commentary: Nice try, criminal scum, operating with the support of the mainstream media monopoly! While you’re busy co-opting and misappropriating the word, “anarchy,” and falsely defining it to mean “chaos,” I’ll provide some helpful tips to help my Statist friends sort things out:

Here’s the original definition of “anarchy,” including etymology. All efforts to change this simple, concise explanation can be summed up as a fear-monger-motivated hijacking of the word!

anarchy: (n): without a ruler
(From Greek anarkhia, from anarkhos, from an- ‘without’ + arkhos ‘chief, ruler’)

There is almost no other word in the English language that so easily defines this concept, with a history stretching back for almost half a millennium! The word Voluntaryism is a much more recent attempt (being only about a century old) to reinvent the stolen word, with the implied understanding that “anarchy” is purposefully being robbed of its meaning.

As you can see, what is taking place in the top picture below can already be defined in so many ways – from “chaos,” to “lawlessness,” to “vandalism,” to “criminality”… the list goes on. The only reason to toss the word “anarchy” into the mix is out of ignorance, or to discredit and smear LEGITIMATE anarchists, who adhere to a peaceful, principled, anti-political philosophy of freedom!

One Response to Legitimate Anarchists Adhere to a Peaceful, Principled, Anti-Political Philosophy of Freedom!