Cop Who Attempted to Stop Police Brutality May Lose Job 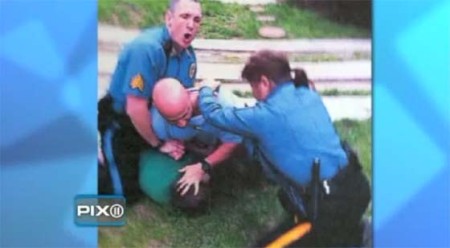 Bogota Officer May Be Fired For Stopping Beatdown:
http://pix11.com/news/wpix-officer-may-be-fired-after-stopping-beatdown,0,2795580.story/

Plenty of cop “beat downs” can be found online, but how often does the officer who stops others from handing out the beating get fired for it? That’s exactly what’s happening to Officer Regina Tasca in the Bogota Police Department.

Tasca’s dashboard camera captured her as she attempted to stop two officers from beating an emotionally disturbed young man. Just days after the incident, she was told she was being suspended with pay. A year later, her trial is about to begin as the Bogota PD seeks to fire her.

My Commentary: She sees a crime in progress by fellow officers, stops it, and she’s suspended for it! Apparently, she didn’t realize that the biggest gang in America wears blue and carries a badge!