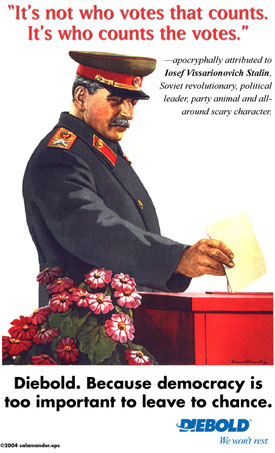 “In truth, in the case of individuals, their actual voting is not to be taken as proof of consent, even for the time being. On the contrary, it is to be considered that, without his consent having even been asked a man finds himself environed by a government that he cannot resist; a government that forces him to pay money, render service, and forego the exercise of many of his natural rights, under peril of weighty punishments. He sees, too, that other men practice this tyranny over him by the use of the ballot. He sees further, that, if he will but use the ballot himself, he has some chance of relieving himself from this tyranny of others, by subjecting them to his own. In short, he finds himself, without his consent, so situated that, if he use the ballot, he MAY become a master; if he does not use it, he MUST become a slave. And he has NO OTHER ALTERNATIVE than these two. In self-defence, he attempts the former. His case is analogous to that of a man who has been forced into battle, where he must either kill others, or be killed himself. Because, to save his own life in battle, a man takes the lives of his opponents, it is not to be inferred that the battle is one of his own choosing. Neither in contests with the ballot – which is a mere substitute for a bullet – because, as his only chance of self-preservation, a man uses a ballot, is it to be inferred that the contest is one into which he voluntarily entered; that he voluntarily set up all his own natural rights, as a stake against those of others, to be lost or won by the mere power of numbers. On the contrary, it is to be considered that, in an exigency into which he had been forced by others, and in which no other means of self-defence offered, he, as a matter of necessity, used the only one that was left to him.”

It’s the basic principle of force. Plato acknowledged it well when he said:

“One of the penalties for refusing to participate in politics is that you end up being governed by your inferiors.”

Once again, as stated above, we see the illusion of choice and false paradigm fueling the vote- either participate, or be governed. There is no alternative wherein we exercise our rights without force or consolidation. And, as the root word for politics is policing, Plato’s words ring with two layers of truth. History reveals that we can either allow ourselves to be policed by the control-freaks of the world, who have designs against our personal freedoms, OR we can ASSERT our own natural rights against their tyranny using the power of our natural-born self-sovereignty.

Obviously, the American system of government became obsolete long ago– either by legitimizing tyranny, or being helpless to avoid it (to paraphrase another quote from Lysander Spooner). And, from Bush to Obama – the wars of the rich mummies will continue, whether overtly (military) or covertly (CIA)!! No amount of voting through a rigged system will really attack the root of our problems. It’s time for Americans to wake up and realize that the Constitution is no more. It has been incrementally diluted, and the government no longer functions in a protective capacity because of it. Therefore, until we make some revolutionary changes, and soon, the American nation of sheep shall be ruined by pigs!!!

Jonas A.: Yeah…speaking of which…when we have Sheep as candidates…we all become sheep to the system, hence by not participating, we are slowly but surely not giving the Powers-That-Be, the satisfaction…