I originally posted the following news article onto my Facebook wall… 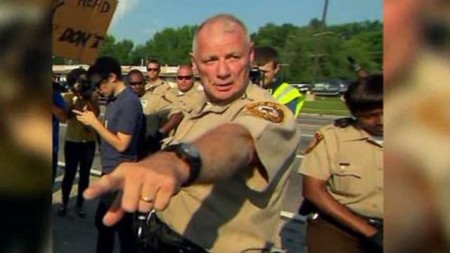 A St. Louis County police officer will be on administrative leave for the duration of an internal investigation into a video in which he bragged about being a “killer” and made derogatory comments, a department spokesman told NBC News Saturday. Officer Dan Page, a 35-year police veteran and military service member is seen in the hour-long video addressing a St. Louis chapter of the Oath Keepers, a conservative group of former servicemen, saying in part, “I’m also a killer. I’ve killed a lot, and if I need to I’ll kill a whole bunch more. If you don’t want to get killed, don’t show up in front of me.”

My Commentary: This swine spoke before “Oathkeepers” a while back.

I really have to wonder if he’s a double-agent, planted within the Oathkeepers movement to completely discredit the it… Alternatively, he could just be another in a long line of “useful idiots,” truly believing he’s helping Americans, even though he’s actually doing much harm.

Here’s some radio interviews he recently engaged in: