The following correspondence originally took place on my Facebook wall, upon my post, “Hopeful That Wikileaks Will End Hillary’s Presidential Campaign, and More!“… 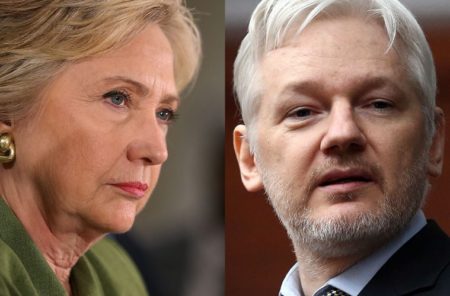 Rayn: Sweet!!! Can they end Trump’s, while they’re at it?

Nelson E.: this was supposed to happen at 3 in the morning last night

Rayn: I watched it live, early this morning. It was completely uneventful, with no new information divulged. It appeared to be more of a 10-year anniversary celebration of Wikileaks, with a plug for a book, as well. Strangely, Assange scoffed at the notion that he would release anything pertinent at such an hour, and he also disavowed the idea that he would be going after Killary with any new info. However, he did indicat that some important information would be released near end of the year. It was a relative waste of time, and many even accused him of “trolling” the alternative news networks, both during and after his live stream, Others claimed he officially sold out, and still others speculated that he was threatened into a bizarre form of silence. It’s a shame that it all went down like that.

Greg C.: Rayn…are you getting frisky? YOUR INDICTED! , FOR BEIN A TURNCOAT, A BLOODY GRASSER… (Hardcore Henry)

As the political campaigns of both Hillary Clinton and Donald Trump continue in the United States, the battle for presidency has begun to resemble reality television more than genuine politics.

Statements are made, stances taken, and arguments ignited that all seem far too scripted and controversial to have occurred organically. Whether or not this is the case, we as a collective have fully bought into it, as this first presidential debate broke viewership records, with 84 million tuning in to the “interesting” spar, according to Nielsen.

While both presidential hopefuls have already endured significant scrutiny, it appears as though Hillary Clinton may be in line for the next devastating blow, though she has already been victimized by the stealthy work of Julian Assange on several occasions:

My Commentary: Sweet!!! Can they end Trump’s, while they’re at it?