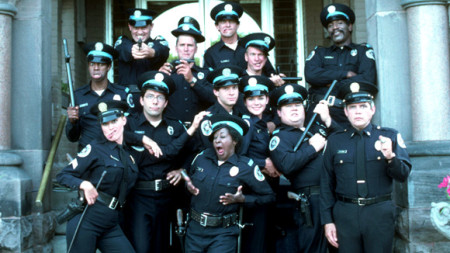 From the movie, “Police Academy 4”

The largest class in the history of the Port Authority Police Department, graduated on August 22, at the Dunn Sports Center in Elizabeth New Jersey.

Immediately following the graduation more than a dozen officers broke off from the group and began to raise hell.

The newly anointed boys in blue ended up in the Texas Arizona Bar and Grill, a large brewery and sports bar in Hoboken, NJ.

“It quickly got totally out of control,” a source told On The Inside.

My Commentary: Over a dozen newly-minted Port Authority Piglets treat New Jersey to a dose of the criminality that local residents will soon find themselves forced to pay protection taxes for (or, should I say, “from”?) The biggest gang in America wears blue and caries a badge!