The following correspondence originally took place upon my Facebook wall, after an acquaintance posted artwork from here… 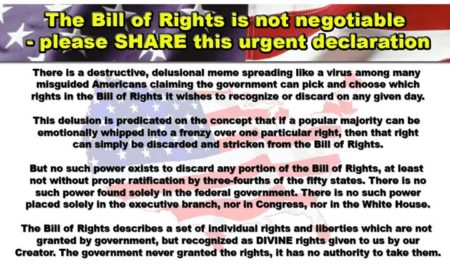 “The Bill of Rights is not negotiable – SHARE this urgent declaration
There is a destructive, delusional meme spreading like a virus among many misguided Americans. It pushes the idea that government can pick and choose which rights codified in the Bill of Rights it wishes to recognize or discard on any given day.
This delusion is predicated on the concept that if a popular majority can be emotionally whipped into a frenzy over one particular right, then that right can simply be discarded and stricken from the Bill of Rights.
But no such power exists to discard any portion of the Bill of Rights, at least not without proper ratification by three-fourths of the fifty states. There is no such power found solely in the federal government. There is no such power placed solely in the executive branch, nor in Congress, nor in the White House.
The Bill of Rights describes a set of individual rights and liberties which are not granted by government, but recognized as DIVINE rights given to use by our Creator. Because government never granted the rights in the first place, it has no authority to take them.”

Rayn: Indeed! In their slumber, many have forgotten that the Bill of Rights only *guarantees* our Natural rights – which are an inherent to our Self-Ownership. To believe that a legal document can “grant” us our BIRTHRIGHT of FREEDOM is dangerously naive, and logically fallacious! Anything that can be given and taken away would more accurately called a PRIVILEGE!