Debunking Falsehoods About the Homeless

The following debate originally took place on my Facebook wall, upon my post, “Another Perfect Example of the State Using Public Tax Dollars to ‘Take Care’ of the Homeless“…

Rayn: Is this that “compassion for the poor” y’all imagined your tax dollars pay for? Suckers!

It’s just like those helpful “vagrancy” laws, used by the State to harass, fine and imprison the homeless. 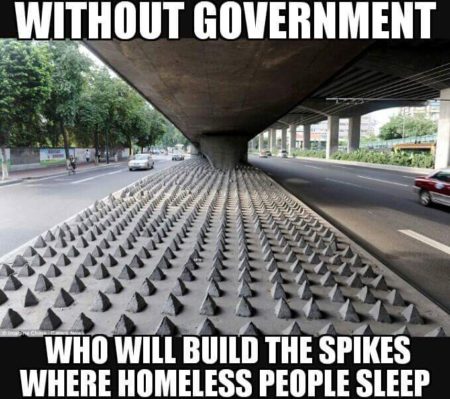 “Without government, who will build the spikes where homeless people sleep?”

Lutz S.: Nastural selection. If you end up homeless, you 90% are either a drunk, junkie, or mentally disordered.

Lutz S.: Those genes need to go tf away

For three and a half years, my family and I were homeless, living in the NYC shelter system nightmare. I was twelve when we entered, and fifteen when we finally escaped.

Jesus G.: without government who will be able to read/watch Superman cartoons! Spider-man anyone? 😮