Are Natural Rights Man-Made, or Are We Born With Them?

The following debate originally took place on my Facebook wall, upon my post, “Rights Are NOT Gifts from Government!“…

Rayn: Wake up to the amazing, liberating Truth that Self-Ownership is our BIRTHRIGHT! Yet, one cannot secure such a unique and sacred possession without first acknowledging every other Individual on Earth to hold their very own, as well! And, THIS is the ultimate PROOF of understanding! 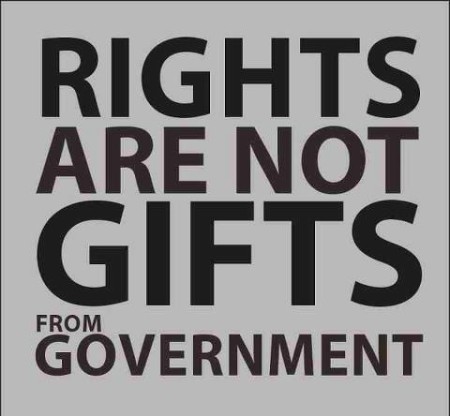 “Rights are not gifts from government.”

Brian K.: According to George Carlin, rights are imaginary. We made them up.

Rayn:  I’m not sure which “rights” Carlin is referring to, Brian, but you can rest assured that my Natural Right to live is NOT AT ALL imaginary, but a self-evident truth! I was born with it, just like you! Meanwhile, our natural right to Self-Ownership, which is hinged upon our liberty, along with the Non-Aggression Principle, is also self-evident and inborn! Aside from this, our natural right to the justice of a peaceful co-existence, via consensual Cooperation, is also very real and inborn, as we have lived by this Natural Law FROM OUR VERY CONCEPTION – with our lives fully depend upon its productive and reproducible results!Here is an informative video on the topic, including a good understanding of other property rights that are derived from self-ownership, and a right to exist:

The Philosophy of Liberty:

I shared the picture above to remind others that paper documents, stone tablets and legally fictitious straw-men will NEVER be able to “grant” us what we are already born with. To believe in such dangerous superstitious nonsense is to convert our natural rights into nothing more than “privileges,” to be taken away at any time!

Brian J.: Technically, George Carlin is correct. We have no rights in this country. The only rights we have, are the ones from within. Fuck the Government.

Brian K.: What you call in-born rights are imaginary. These are ideas we made up. Look around at nature, i.e. other animals. Nature is quite cruel and vicious. For one thing to live another must die. Temple Grandin has written a great deal on this subject and how it inspired her to create more humane cattle facilities.I’m quite leery of any argument that says it’s self-evident. That’s just another way of saying it’s an assumption. Assumptions are inherent to any kind of conceptual/logical model but the validity hinges on those assumptions. “Essentially, all models are wrong, but some are useful” – George Box.

Brian K.: Taking an argument as an axiom is only appropriate in mathematics. Even then, Gödel discovered that is not, rather cannot be, a perfect, universal system.en.wikipedia.org/wiki/Gödel’s_incompleteness_theorems

Brian K.: Brian J., we, humans created government. It’s flaws are our own fault (or a reflection of our own flaws).

Rayn:  I agree with you, Brian J., that the “rights we have, are the ones from within.” And, yet, that is precisely why any lacking in their acknowledgment DOES NOT equal their lack of existence! We DO have natural rights in this country, and we RETAIN THEM, no matter where else we travel on this planet! What you label as “no rights” in America would more aptly be described as a VIOLATION of them! In conclusion, I agree with your conclusion: “Fuck the government!” 🙂

Rayn: Brian K., my natural right to live, to own myself, and to peacefully co-exist via consensual cooperation are not “imaginary,” nor are they “ideas *we* made up.” I was born with all of them INTACT, and REAL, by virtue of their VERY ACTUALITY! As even Merriam-Webster dictionary defines “rights,” those I have listed here are each supported by at least three of their given definitions: (1) they most certainly DO have “the quality of being factually correct,” (since my very birth), (2) they DO containing “the cause of truth” (even if violated), and (3) they MOST DEFINITELY ARE “something to which [I have] a just claim”! And, more than just PRECEDING my imagination, two of the three rights above – being my life and self-ownership – are responsible for harboring my imagination, in the first place! Meanwhile, far from being “man-made,” the rights I listed here are NOT EVEN EXCLUSIVE to humanity, as many other members of the animal kingdom have them, as well, in accordance with natural law!When I call my natural rights “self-evident,” that’s not “just another way of saying it’s an assumption.” Rather, I mean, “containing its own evidence or proof without need of further demonstration,” being “prima facie evidence,” or “sufficient to establish a fact unless disproved. This definition perfectly coincides with understanding that my natural rights have “the quality or state of being factually correct,” as I stated before. After all: I AM alive, I DO own myself, and I DO peacefully co-exist via consensual cooperation – all right from birth! And, there is no way to disprove these facts!Individuals who deny my natural right to live, to own myself, and to peacefully co-exist are simply those who wish to violate them, by way of robbery, slavery and/or murder – either directly, or through violent, coercive proxy (church, state, etc). This is typically done while espousing the usual brand of illogical superstition, replete with “original sin/presumed guilt/pre-crime/chaos” myth about the inherent “evil/cruelty/disorder” of humanity. Of course, I reject such cult-like nonsense, as it is absolutely illegitimate. Not only have I personally met more kind and caring souls than I can count, I also recognize every human being as a UNIQUE, SOVEREIGN INDIVIDUAL – to be judged ONLY by the merits of their OWN character! As far as I’m concerned, assigning humanity with labels fit for criminals is merely an excuse for the corrupt and polluted souls among us to collectively oppress and punish us all for crimes we haven’t even committed, in an effort to catch a boogie man that lives no further than the nearest MIRROR! Besides, biology, itself, does NOT tend to agree with the “freedom is slavery” double-think mentality of such control-freaks, no matter how many clever excuses they come up with in order to justify their lust to harm and enslave others:Forget Survival of the Fittest: It Is Kindness That Counts (Aug. 2009):http://www.scientificamerican.com/article.cfm?id=forget-survival-of-the-fittestHumans Evolved To Be Peaceful, Cooperative And Social Animals, Not Predators (Feb. 2006):http://www.medicalnewstoday.com/releases/38011.phpThe Compassionate Species (July 2012):http://greatergood.berkeley.edu/article/item/the_compassionate_speciesYoung Children Are Intrinsically Motivated to See Others Helped (August 2011):http://pss.sagepub.com/content/23/9/967We’re In This Together: A Pathbreaking Investigation into the Evolution of Cooperative Behavior (Nov. 2012):http://www.sciencedaily.com/releases/2012/11/121119094629.htmHumans Naturally Cooperative, Altruistic, Social (Sept. 2011):http://phys.org/news/2011-09-humans-naturally-cooperative-altruistic-social.htmlA Cooperative Species: Human Reciprocity and Its Evolution (Jan. 2011):http://press.princeton.edu/titles/9474.htmlInstinctively, People Are Generous (Sept. 2012):http://news.discovery.com/human/human-instinct-generous-120919.html

(update: archived copy of above link located here: http://web.archive.org/web/20121004113714/http://news.discovery.com/human/human-instinct-generous-120919.html)Emory Brain Imaging Studies Reveal Biological Basis For Human Cooperation (July 2002):(Brain intrinsically rewards reciprocal altruism over self-interest)http://www.sciencedaily.com/releases/2002/07/020718075131.htm(*all it takes is free-will initiation of altruism by only one party in most cases!)Thinking About Giving, Not Receiving, Motivates People to Help Others (Aug. 2012):http://www.psychologicalscience.org/index.php/news/releases/thinking-about-giving-not-receiving-motivates-people-to-help-others.html

4 Responses to Are Natural Rights Man-Made, or Are We Born With Them?