Rayn: About to make some Organic Five County Espresso! 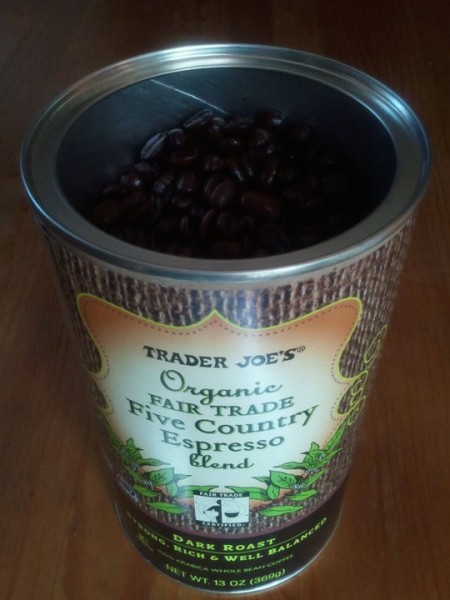 Rayn: Amusing, Bram! However, my husband and I seek out and purchase our organic food together! Yet, he’s African-American and Native America (and I would never be foolish enough to identify as “white”), so… And, I don’t know about the pretentious, half-stepping, city-slicker “white” people mentioned in the article you posted, but I was born in a rural area, across the street from a water kill, and down the dirt road from a cow pasture! I know EXACTLY what COW SHIT smells like, and what REAL FARMS look like! Growing up, I have maintained MANY a backyard garden – fertilized, and also organic – with my parents, my uncles, my grandparents, and also my friends! I have also maintained many compost piles, which is exactly where the grinds of the espresso pictured above will go once they are used! And, it is MUCH BETTER to compost with ORGANICS, as neurotoxic pesticides and herbicides DISRUPT the decomposition process! I restlessly research organic companies, especially those with livestock, and do MY VERY BEST, within my budget, to avoid the fraudsters I discover (i.e. “Horizon,” the organic milk company that uses milk pumping machines, instead of farm hands). I am also sure to go beyond the “organic” seal when purchasing eggs, requiring them to say “cage-free” or “free-range,” and “vegetarian,” (because companies can still label eggs as “organic,” even if the hen has been cannibalistically fed chicken parts, so long as the chicken parts are “organic”)! If I had HALF the money that the rich “white” people I see shopping at Whole Foods have, rest assured that I would join a CO-OP, and ONLY BUY LOCALLY, from the TRI-STATE AREA, first, then the rest of the USA, second! Aside from this, read the following two sentences from the article you posted, and let me know if you can spot the HUGE contradiction within: “In spite of the fact that most organic food is made by major agribusiness, and they just use it as an excuse to jack up prices, white people will always lose their mind for organic anything. Never mind the fact that if the world were to switch to 100% organic food tomorow, half the earth would die of starvation.” Did you see it? No? Well, read it again! If the organic label is just an “excuse to jack up prices,” then how exactly would “half the earth” allegedly “die of starvation” if we were to all make the “switch to 100% organic food tomorrow”? To even the most uninformed reader, critical thinking would indicate that these two sentences are an indirect admission by the article’s author that, acre for acre, organic farmers actually end up with LOWER CROP YIELDS than farmers using pesticides and fertilizers! In other words, the organic label is not really just an “excuse to jack up prices,” but instead, when comparing two farms of the same size, really just signifies QUALITY over QUANTITY! And, business-wise, there is NOTHING unusual, or MANIPULATIVE, about pricing based on this!

In the same way that stores in the USA increase the prices of merchandise on their shelves in order to account for theft, and high-end restaurants determine plate prices, in part, based on the ability of the establishment to keep certain fresh, yet rare, ingredients on hand everyday, and discard them at the end of the night, organic farmers charge their customers, in part, based on their lost portion of crop. And, contrary to the idea that this is some sort of scam, the math is good because these organic farmers still saved seeds, tilled soil, planted crops, then fed, organically fertilized and watered them for an entire season, even though not all produce was able to be harvested!

Now, in regard to the article’s DISINGENUOUS claim that “if the world were to switch to 100% organic food tomorrow, half the earth would die of starvation”… Completely UNFOUNDED!

For one, the use of toxic pesticides, herbicides, fertilizers, and even antibiotics, is a VERY MODERN INVENTION in comparison to the age-old organic farming of yesteryear, and so, CANNOT BE PROOFLESSLY HERALDED as some sort of dietary “savior” of humanity! There is simply no research to indicate such a bold and sweeping claim! Research indicates that these chemicals are placed into our food supply in order to increase PROFIT, not to keep us all sustained! And, these poisons have had nothing but ILL EFFECTS on the health of the air, the water, the soil, wildlife, and human life, yet corporations continue to use them, even going so far as to rename offending chemicals, so that consumers are not able to readily identify them! They have also lobbied and campaigned for legislation that would prevent more natural companies from using phrases like “hormone-free” on their labels! Obviously, these companies have agendas that outright trump the desire to please their customer-base!

Secondly, the daily consumption of meat is also a VERY MODERN INVENTION, and is TRULY A DECADENT DISPLAY of WASTE, EXCESS and downright CRUELTY! Keep in mind that 80% of the world’s grain supply, which would COMPLETELY END humanity’s FOOD SUPPLY CRISIS, is instead used to sustain the LIVESTOCK INDUSTRY, instead!!!! Once again, HUMAN NEED is NO MATCH for INDUSTRY and CORPORATE CONTROL of ALL LIFE! Read my article on the topic, “The Startling Effects of Going Vegetarian for Just ONE DAY”!
http://acidrayn.com/2009/04/06/the-startling-effects-of-going-vegetarian-for-just-one-day/

Sorry for the length! I’m sure you weren’t expecting a book, but you pretty much ventured into the realm of one of my Aspergian special interests! If you were neurotypical, I would likely spend the next hour looking for a way to edit my words into a more concise version of what you see here.