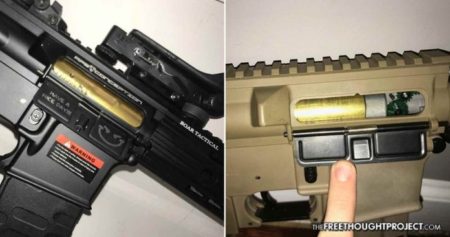 Child Arrested for Sharing Photo of Toy Gun on Social Media That He Got for His Birthday:
http://thefreethoughtproject.com/high-school-student-suspended-arrested-for-sharing-photo-of-empty-toy-gun-on-social-media/

(Rachel Blevins) A teenage boy was arrested and detained for the crime of posting a photo on social media of a toy gun he received as a birthday gift. Despite the fact that the photo included a “Warning” sticker on the gun, which stated that it was a toy, the student was suspended from school and treated as a criminal.

As a senior at Amity High Regional School, Zach Cassidento said he did not think he was doing anything wrong when he received a new airsoft gun for his birthday and posted a photo of it on Snapchat.

My Commentary: Was a warrant even issued? If so, which criminal judge signed it?