As I scrolled through my Facebook news feed, I discovered the following artwork here, being shared by the page, “Government Does Not Exist,” and originally posted it to my own wall, along with commentary… 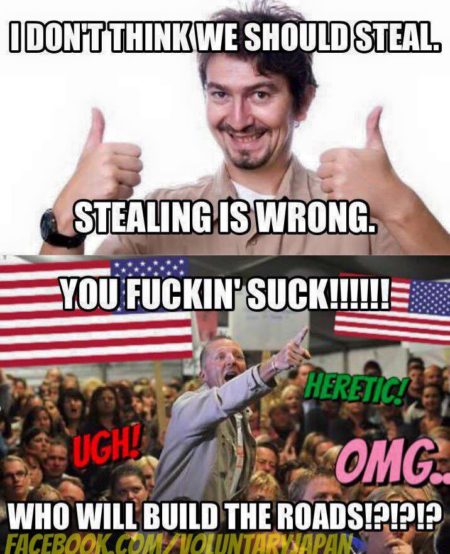 My Commentary: Statism: a highly-illogical, contradictory, violent and coercive cult of injustice meant to disrupt the moral compass of even the most well-intentioned victim…

(Asa J) A single mom is outraged after she was arrested and taken to jail by police in the Village of Cahokia, Illinois for not cutting her grass.

Mother of five, Ebony Conner, said she was given a verbal warning by a code enforcement officer at the end of June to remove trash, tow cars from her driveway, and cut her grass.

My Commentary: The Draconian Police State is the problem…

No Victim, No Crime! No Justice, No Peace!

The hostile takeover of the US government corporation by the Military-Prison-Industrial-Complex is almost complete… Just. A. Few. More. Laws.

The following correspondence originally took place upon the Facebook wall of an acquaintance, after he shared a captioned photo from here…

Kenneth B.: It’s only a matter of time now…

Brooke N.: Only if they didn’t put additives into it. If it’s legal though I don’t think it should be regulated, I think the market should determine price.