The following debate originally took place upon my Facebook wall, after I posted artwork being shared by the page, “The Anarchists of Pakistan“… 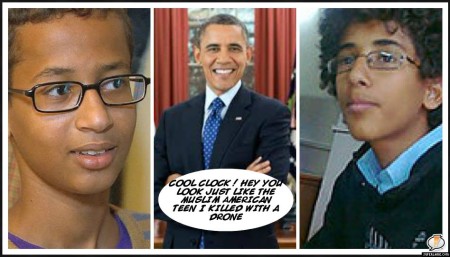 “Cool clock! Hey, you look just like the Muslim American teen I killed with a drone”

Anke M.: That kid was in a war zone his father , who preached aggression against America and incited terrorist attacks around the globe should have known better than to let the kid visit a war zone.
I believe the other kid was a productive, brilliant student at an American Highschool in an American State. Don’t confuse the two and muddy up the proper state of affairs!

Rayn: Abdulrahman al-Awlaki, was a US citizen and an innocent child, just like Ahmed Mohamed is. Specifically, he was born in Denver, Colorado, and lived in American until he was 7 years old.

However, unlike Mohamed, al-Awlaki was murdered by a US drone strike while peacefully eating dinner at a restaurant in Yemen with his teenage cousin, who was also killed in the attack, along with at least five other civilians…

Besides this, al-Awlaki was not even with his father that day because he was still in the process of searching for him and he had not seen him in years. Sadly for him, it was during this very quest that he soon unwittingly entered a lawless, war *criminal* zone, where the CIA had been regularly terrorizing civilians for years in the name of “fighting terror.”

I’m not at all confused, and my view on the matter is crystal-clear. Ahmed Mohamed deserves to live in peace, and so did Abdulrahman al-Awlaki. Obama is the actor who’s muddying this issue with his political doubletalk. He’s the professional liar extending a politically-convenient, popular-opinion-pleasing olive branch to Mohamed, while his administration continues to justify covertly dropping bombs on al-Awlaki, and other innocents like him.

The proper state of affairs will not be reached until all of the lies, the violence, the murders, and war crimes of the State are exposed.

Genaire: I equate it to Canada trying to kill the K.K.K. which is also a terrorist group. How can they kill a K.K.K. chapter without killing the innocent people surrounding these chapters? Does the killing of our innocent civilians justify the bombing of this terrorist group? When their are no clear cut lines of battle as is the case when fighting “terror” the whole world becomes an open target.