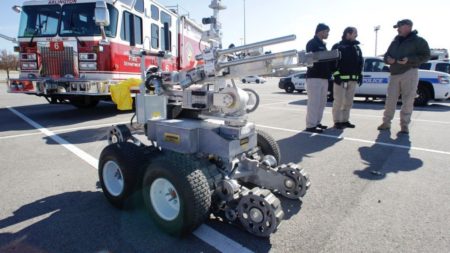 (Nadia Prupis) As news emerges that police officers in Dallas, Texas used an armed robot to kill the suspected shooter in Thursday night’s ambush, experts are warning that it represents a sea change in police militarization that only heightens risks to human and constitutional rights.

Dallas Police Chief David Brown said Friday morning during a press conference that police “saw no other option but to use our bomb robot and place a device on its extension for it to detonate” where the suspect had taken refuge in a parking garage as police tried to negotiate with him, adding that he was “deceased as a result of detonating the bomb.”

My Commentary: Unprecedented, with far-reaching implications…

“He that would make his own liberty secure, must guard even his enemy from oppression; for if he violates this duty, he establishes a precedent that will reach to himself.” – Thomas Paine

It’s still not too late to reject the fallacious, endless “war on terrorism” and end the crimes against humanity being committed daily in its name. After all… war, itself, is terrorism.