The following correspondence originally took place upon the Facebook wall of family, after they posted artwork being shared by the page, “Cop Block“… 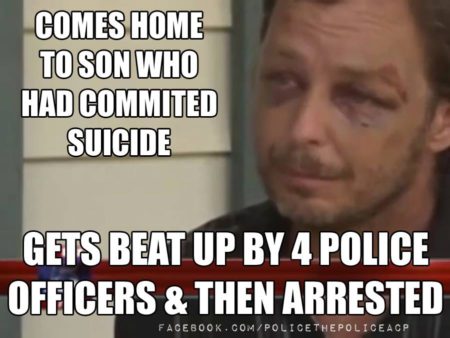 “Comes home to son, who had committed suicide. Gets beat up by 4 police officers & then arrested”

Rayn: Stephen, according to Cain Dixon, as paramedics began tending to his still-unresponsive stepson, an officer came up behind him, grabbed his arm, and demanded, “you need to sit down.” Dixon jerked his arm away, and responded, “don’t touch me.” The officer then tackled him, and began assaulting him. This quickly escalated into two officers restraining him, while they beat him about the face and head. After the police concluded their brutal assault upon him, Dixon was then arrested, and charged with “federal obstruction.”

Brian M.: Information technology has made police obsolete. Like unemployed swordsmen in Japan, after guns were introduced, police troll around for things to do. Defund these parasites.

Daniel Sv.: Better a local militia that someone knows to protect rather than policemen getting thrills from a power trip.