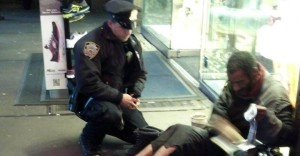 (Cassius Methyl, TheAntiMedia) It’s just not good enough for it to be illegal to panhandle in San Antonio; now, the chief of police wants to ban giving to the homeless too.

In this economic black hole we find ourselves in with no way out, there are more people on the street every day without a lot of choices on how to get food, how to scramble for federal reserve notes to survive.

To make matters much worse for the homeless of San Antonio, those people struggling for federal reserve notes and food may now find generosity much more rare as it could become illegal for people to give to them at all.

If the police chief of San Antonio has his way, the police of the city will soon be granted the ability to force people giving to the homeless to give to the state; tickets, citations, robbery on yellow slips of paper.

My Commentary: The compassion of the State is boundless. So, don’t forget to pay your “fair share” of taxes! How ELSE do you expect the homeless to be “taken care of”?

As Friedrich Nietzsche once said, “A state, is called the coldest of all cold monsters.”