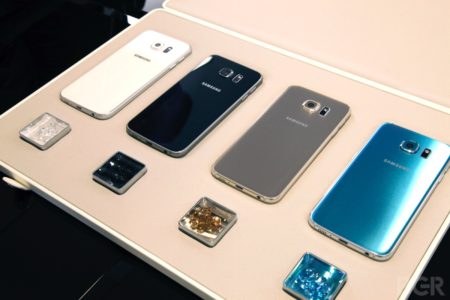 Damion S.: They went apple on you.

Terrence B.: Nope! Hopefully getting mine on Friday.

Genaire: No removable battery or micro sd card slot would be a deal breaker for me. All of the other features and performance specs I would be able to achieve by simply rooting the phone.

Terrence B.: Well I don’t take my card out and since I’ve had my S5 I’ve only taken the back off probably twice..so I’m ok with it…lol

Terrence B.: I don’t go near water anyways.. Lol

Genaire: How much storage space is T-mobile offering?

Terrence B.: Yep Rayn and we men wouldn’t have it any other way.. Lol

Rayn: That remains to be seen. This phone certainly isn’t mod-friendly, and Samsung’s weak attempt to lock users out of installing custom ROMs in the latest Galaxy S, by removing the microSD slot, will only cause them to lose the loyal, tech-savvy, Android-loving customer base that helped make them as popular as they’ve become, in the first place. This S6 also screws over the religious data-backers, too, as they will no longer have a separate partition to store information within, in case the onboard OS fails, or the phone electrically shorts out, for any reason…

Terrence B.: Ok Rayn ok… It’s just a phone to some, not that serious to me.. As long as I can take it back when it’s acting up, I’m good…lol

Rayn: Well, like many, my phone happens to double as my camera, so I would never purchase a unit lacking a mountable data expansion slot.

Terrence B.: Just DL your pic’s to a computer and save them there to a SD card.

Rayn: Thanks for the suggestion, but it’s completely inapplicable to the two unforeseeable circumstances I described in my last comment.