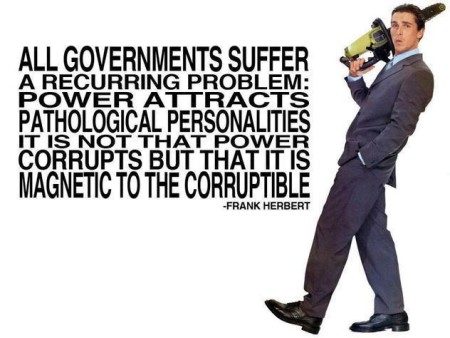 “All governments suffer from a recurring problem: power attracts pathological personalities. It is not that power corrupts, but that it is magnetic to the corruptible.” – Frank Herbert

My Commentary: Along with the above artwork,  Liberty Minds captioned it with one of my favorite quotes, by Robert LeFevre, though I believe it would be more accurately stated as,  “If men [do] good, you don’t need government; if men [do] evil or [act] ambivalent, you don’t dare have one,” as this modification reflects the uncertain future factor that free-will brings.

Of course,  it was Baron John Acton who said, “power tends to corrupt, and absolute power corrupts absolutely,” and that is the idea that Frank Herbert was building upon.