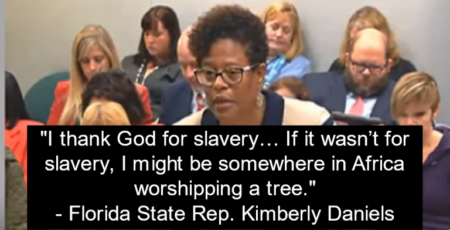 As I scrolled through my Facebook news feed, I discovered the following artwork here, being shared by the page, “Heartland Institute,” and originally posted it to my own wall, along with commentary… 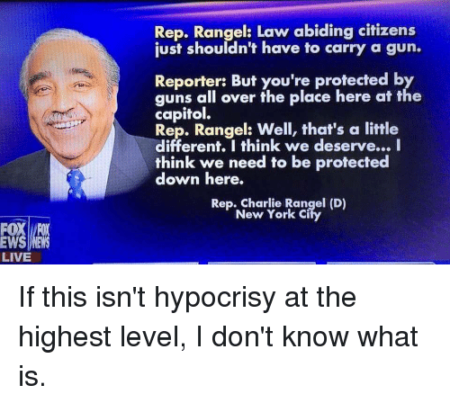 “Rep. Rangel: Law abiding citizens just shouldn’t have to carry guns.
Reporter: But, you’re protected by guns all over the place here at the Capitol.
Rep. Rangel: Well, that’s a little different. I think we deserve… I think we need to be protected down here.”
– Rep. Charlie Rangel (D), New York City
(If this isn’t hypocrisy at the highest level, I don’t know what is.)

My Commentary: Silly peasants. Guns are for the elect, and their mercenaries!

(note: though I previously shared a slightly different version of this artwork in June of 2017, within my post, “To the State, No Lives Matter…,” I still felt compelled to offer up an alternative commentary when I saw it again, due to the recent anti-gun push triggered by the latest school shooting, here in the States)

Brown, 71, turned herself in to the Sumter Correctional Institution in Florida, one of the largest federal prisons in the country, which houses both violent and non-violent offenders. Brown will be serving her five-year sentence at a minimum-security satellite facility, which keeps roughly 391 other female inmates.

As I scrolled through my Facebook memories, I discovered the following artwork here, being shared by the page, “Young Americans for Liberty,” which I originally posted to my own wall in June of 2016, and decidedly re-shared it, while adding a commentary… 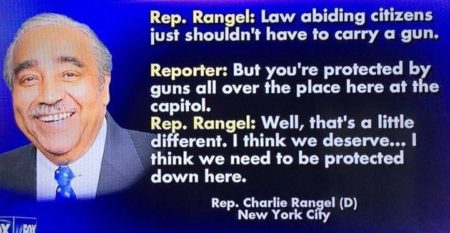 “Rep. Rangel: Law abiding citizens just shouldn’t have to carry guns.
Reporter: But, you’re protected by guns all over the place here at the Capitol.
Rep. Rangel: Well, that’s a little different. I think we deserve… I think we need to be protected down here.”
– Rep. Charlie Rangel (D), New York City

My Commentary: As far as the State is concerned, #NoLivesMatter…

The following correspondence originally took place upon my Facebook wall, after I posted artwork being shared by the page, “Stateless Sweets“…

“Insanity is doing the same thing over and over and expecting different results.”

Steve L.: The average American doesn’t have much power to influence their government. Use what power you have carefully.

“When people put their ballots in the boxes, they are, by that act, inoculated against the feeling that the government is not theirs. They then accept, in some measure, that its errors are their errors, its aberrations their aberrations, that any revolt will be against them. It’s a remarkably shrewd and rather conservative arrangement when one thinks of it.” ~ John Kenneth Galbraith, The Age of Uncertainty (1977), Chapter 12, p. 330.

Rayn: “In truth, in the case of individuals, their actual voting is not to be taken as proof of consent, even for the time being. On the contrary, it is to be considered that, without his consent having even been asked a man finds himself environed by a government that he cannot resist; a government that forces him to pay money, render service, and forego the exercise of many of his natural rights, under peril of weighty punishments. He sees, too, that other men practice this tyranny over him by the use of the ballot. He sees further, that, if he will but use the ballot himself, he has some chance of relieving himself from this tyranny of others, by subjecting them to his own. In short, he finds himself, without his consent, so situated that, if he use the ballot, he MAY become a master; if he does not use it, he MUST become a slave. And he has NO OTHER ALTERNATIVE than these two. In self-defence, he attempts the former. His case is analogous to that of a man who has been forced into battle, where he must either kill others, or be killed himself. Because, to save his own life in battle, a man takes the lives of his opponents, it is not to be inferred that the battle is one of his own choosing. Neither in contests with the ballot – which is a mere substitute for a bullet – because, as his only chance of self-preservation, a man uses a ballot, is it to be inferred that the contest is one into which he voluntarily entered; that he voluntarily set up all his own natural rights, as a stake against those of others, to be lost or won by the mere power of numbers. On the contrary, it is to be considered that, in an exigency into which he had been forced by others, and in which no other means of self-defence offered, he, as a matter of necessity, used the only one that was left to him.” – Lysander Spooner, 1867