The Whitest Kids You Know – Pledge of Allegiance:

Rayn: When I was [around 9 or 10 years old], I asked my mother if I was required to participate in this bizarre religious ritual at school, because it made me very uncomfortable. When she said, “no,” I was very relieved to no longer to participate, ever again, which satisfied my conscience, greatly! I also stay seated for the “National Anthem” for the same reason. 🙂

Tara M.: As long as there are exams, there will be prayer in school…… 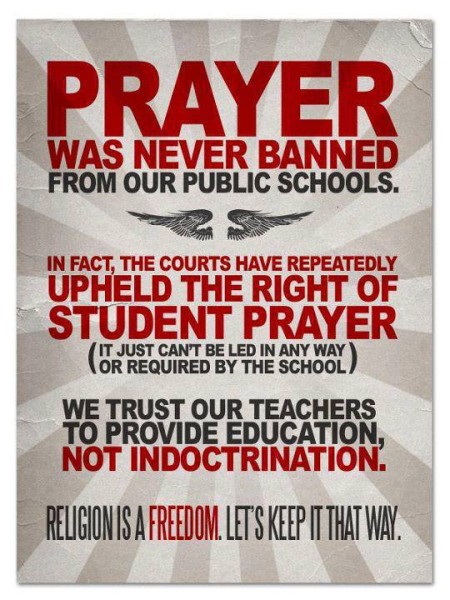 “Prayer was never banned from our public school. In fact, the courts have repeatedly upheld the right of student prayer (it just can’t be led in any way or required by the school). We trust our teachers to provide education, not indoctrination. Religion is a freedom. Let’s keep it that way.”

Rayn: Indeed! Nonetheless, so long as teachers in US public schools continue to lead students in reciting the “Pledge of Allegiance,” they are still guilty of indoctrination! 🙂