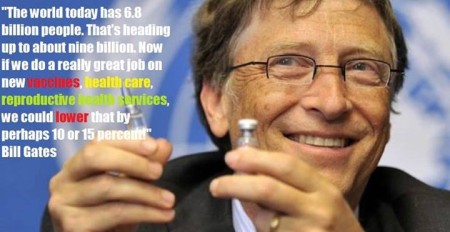 The world today has 6.8 billion people. That’s heading up to about nine billion. Now, if we do a really great job on new vaccines, health care, reproductive services, we could lower that by perhaps 10 or 15 percent.” – Bill Gates

Rayn: Psychopaths Rule the World! Let us expose the pseudo-science of “racial hygienists,” like Bill Gates and Ted Turner! These eugenicists simply worship Death and Human Sacrifice, JUST like priest-castes of ancient times! See them for what they are REALLY are: LIZARDS!

Using the  above figures, I calculate that there are currently about 17.241 million square miles of fertile land on our planet– which translates as roughly 11.034 billion acres of food-sustaining land.

As of 2008, the world human population on Earth was almost 6.7 billion individuals:
http://www.google.com/publicdata?ds=wb-wdi&met=sp_pop_totl&tdim=true&dl=en&hl=en&q=current+world+population

Now, let us go over some hypotheticals, shall we?

If all 6.7 billion individuals on Earth were to evenly distribute, then live upon the roughly 11.034 billion acres of fertile land available on our planet, every single man, woman and child in the world would have approximately 1.647 acres of their very own self-sustaining property to live upon!

Rayn: How exactly does a MONSTROUSLY EVIL, PSYCHOPATHIC EUGENICIST like John Holdren end up becoming America’s “Science Czar”? I’m baffled. Maybe someone could help me to understand. As I see it, Obama is either A COMPLETE INCOMPETENT, UNWILLING to CONDUCT BACKGROUND RESEARCH ON HIS OWN POLITICAL APPOINTMENTS, or he is A VERY CLEVER POLITICIAN, POISED TO INCREMENTALLY REINTRODUCE THE FASCIST PSEUDO-SCIENCE OF EUGENICS – UNDER THE GUISE OF “SAVING THE PLANET.”

Rebekah P.: Wow, just when I was starting to have hope that MAYBE everything would be ok! This is equivalent to making Dracula the head of our national blood bank!