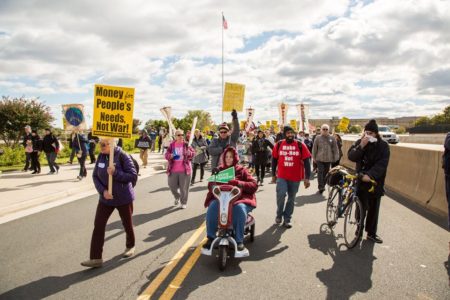 Over 1,000 Women March on the Pentagon to Demand “No More War”:
https://theantimedia.com/women-march-on-the-pentagon-no-more-war/?fbclid=IwAR34DjM5c90quc4M273eA74g0nEUGBLW7vE4HtcHhumRSId18ZGaU4eU4Y0

About 1,500 women and allied men marched on the Pentagon on Sunday to demand an end to perpetual war and the funding of education, health care and other social needs instead.

Stopping U.S. military involvement in Syria and Yemen and closing U.S. military bases around the world were among the demands voiced by the protestors who set out from Pentagon City and marched to the seat of American military power along a one-mile route.