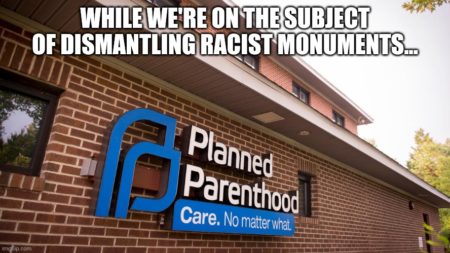 Eugenics and the Nazis — the California Connection:https://m.sfgate.com/opinion/article/Eugenics-and-the-Nazis-the-California-2549771.php?fbclid=IwAR200yBeRcGmy-BsG25NL744AAScqU47exXr4hXJA60x56OLeQ8TNlhRuPE

Rayn: “Feminist” Margaret Sanger, founder of “Planned Parenthood,” was nothing more than a total racist, and a genocidal eugenicist. She outright exposed her murderous, devil-worshiping ideology when she stated:

“Birth Control is not contraception indiscriminately and thoughtlessly practiced. It means the release and cultivation of the better racial elements in our society, and the gradual suppression, elimination and eventual extirpation of defective stocks — those human weeds which threaten the blooming of the finest flowers of American civilization.” (citation: “Apostle of Birth Control Sees Cause Gaining Here”, The New York Times, 1923-04-08)

Those who defend this soulless lizard, and her wicked organization, are typical either historically illiterate, willfully ignorant, or repugnant racists, eagerly-supportive of the age-old State-sponsored destruction of minority groups, and the poor. The fact that this devilry is currently being repackaged as “woman’s rights” is no excuse for supporting it, and really, only highlights just how low the lemming-like among us will go to virtue-signal a most shallow, imagined, and establishment-programmed concept of morality to the rest of society, even in the face of reality. The whole doublethink mentality fueling this issue is mind-blowing.

Michael A.: The lady in the video is wrong white females did not get a lot of rights at the same time as men. They could not vote for a long time and so many other things

Genaire: That’s not what she said. She said black females got their rights at the same time as black men. While white women were complaining about equality from their male counterparts both black men and black women were slaves.

Genaire: That’s not what she said. She said black females got their rights at the same time as black men. While white women were complaining about equality from their male counterparts both black men and black women were slaves.

As I scrolled through my Facebook news feed, I discovered the following artwork here, being shared by the page, “TRUTHgasm,” and originally posted it to the wall of family, along with commentary… 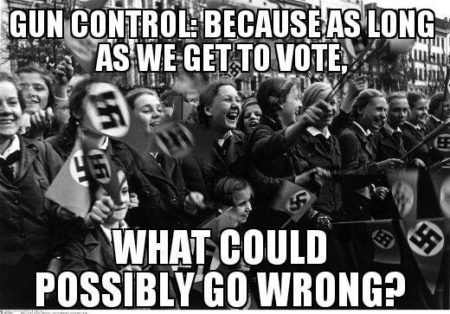 “Gun control: Because as long as we get to vote, what could possibly go wrong?”

My Commentary: “No, no. I don’t think you understand… We voted on it, and the majority approved. That makes it legit. Minority groups, you say? Ha! They have no rights, here.”