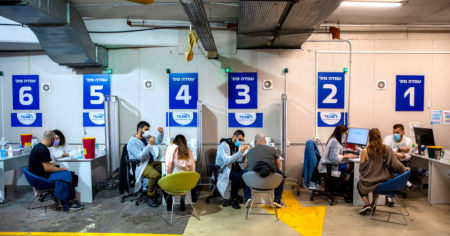 As Israel Reopens, ‘Whoever Does Not Get Vaccinated Will Be Left Behind’:
https://www.nytimes.com/2021/02/18/world/middleeast/israel-covid-vaccine-reopen.html

My Commentary: Eugenics: Why rely on the unpredictability of “natural selection,” when the modern miracle of “government selection” affords the State sole discretion over what constitutes a “disease,” as well as the “opportunity” to rid society of expensive undesirables, like the medically vulnerable*, in the name of “public hygiene”?

*”Do Not Get Vaccinated” If You Have This Syndrome, Says Dr. Fauci:
https://www.msn.com/en-us/health/medical/do-not-get-vaccinated-if-you-have-this-syndrome-says-dr-fauci/ar-BB1bV4Ql

*What Are the Rules on Vaccine Exemptions?
https://www.webmd.com/children/vaccines/what-are-the-rules-on-vaccine-exemptions

“Medical exemptions prevent kids from getting vaccines that might be unsafe for them. Conditions that weaken the immune system, such as a child with cancer undergoing chemotherapy, and severe vaccine allergies…”

It is prudent to realize the term “public hygiene” as synonymous with “racial hygiene,” although one must understand the human genome in pairings more complex than mere phenotypes (like skin color), and recognize other forms of diversity, such as Downs Syndrome, congenital neuropathy, or congenital allergies, to truly appreciate what’s at work, here…

To put it bluntly, whole sections of the human genome have been slated for deletion by an extremely-influential, yet little understood, death cult of eugenicidal zealots, who have operated, for over a century, under the radical belief that the planet and species will benefit from a large-scale culling of the human race…. 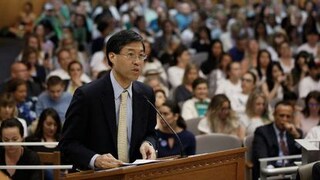 The following correspondence originally took place on my Facebook wall, after I posted artwork from the page, “LibertyManiacs.com“…

Rayn: Warning: Politicians have been shown to cause serious harm to human beings and destruction of private property. 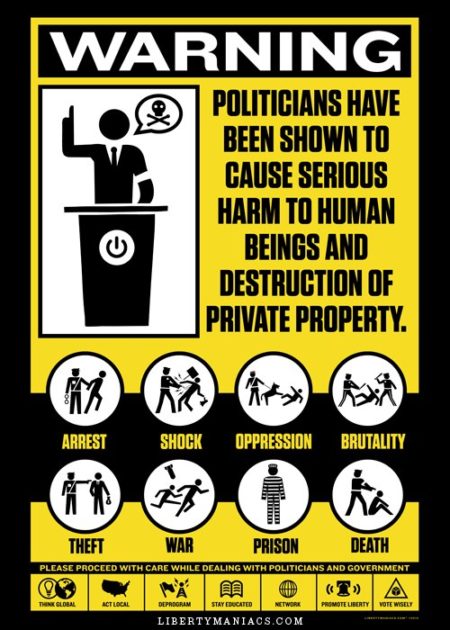 Jesus G.: what about doctors that practice Western Medicine?”

Rayn: No doubt, Jesus. For a good starting point on that topic, you can take a virtual trip through the “Psychiatry: An Industry of Death Museum”:

Jonas A.: I think someone was drinking some Kool Aid from coffee cups…lol

Steven L.: Even dictatorships and theocracies have politicians. The public chooses to elevate them to their position. The fault lies not in the stars but in ourselves.

(note: I previously shared a slightly different version of this artwork in March of 2012, within my post, “Much-Needed Government Warning Label”)

Should Addicts Be Sterilized?
http://www.geneticsandsociety.org/article.php?id=6196&amp%253B&amp%253B

Rayn: Frightening, indeed, Ari, and absolutely in violation of our basic human rights! Best believe that the MOMENT we re-legalize this sort of medical tyranny in America, we can more than expect the most egregious abuses imaginable to once again resume! One can wrap the “logic” of eugenics up in as much “science” as one likes, or feign the desire to “protect children,” but the end result is the unnecessary destruction of life, so in reality, it provably represents neither! Ideas like this are not “progressive” nor “caring,” but a dangerous mixture of arrogance, apathy, oppression and injustice! Disgusting!