The following debate originally took place upon my Facebook wall, after I posted artwork being shared by the page, “NaturalNews.com“… 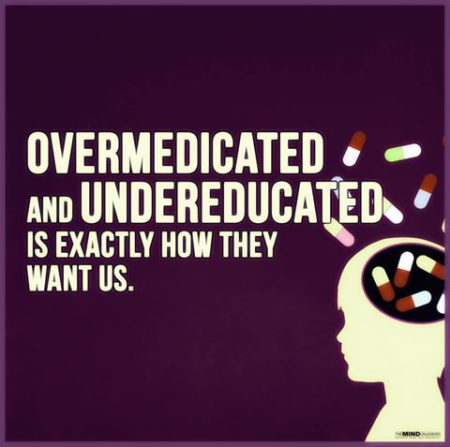 “Over-medicated and under-educated is exactly how they want us.”

Murilo M.: Well, I know that to the uninformed it may seem creepy the idea that lots of people, including children, take medication, but if you take your time to study neurology and psychiatry you will understand the reasons behind it. There are good reasons why lots of people are medicated. The only problem is that unfortunately some people are misdiagnosed and end up taking the wrong medication.

Rayn: The artwork says “overmedicated,” and you appear to have formulated your very own personal definition of what that means to you. You’re arguing against a straw-man you created, and simultaneously calling your imagined opponent “uninformed.” Quite amusing, actually.

Murilo M.: My entire point was to criticize people who believe ADHD is a myth and medicating children with Ritalin is wrong. The same applies to people who think depression is just sadness and anti-depressants are dangerous.