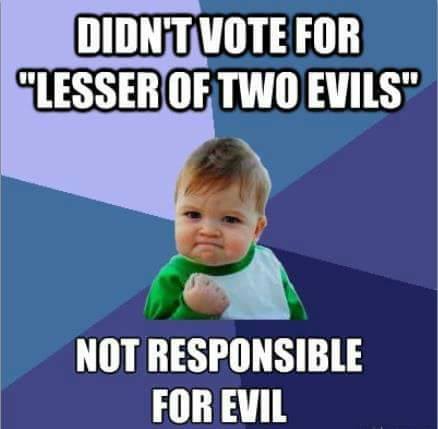 My Answer When People Ask Me if I’m Voting This Year:

Wendy P.: But seriously, out of the 2 evils, I would pick the known evil, Hillary, and not the unknown evil, Trump. Trump will push that detonate button too.

Genaire: A snake striking you that you can see will hurt you just as bad as the one that strikes you that you can’t. Until people start voting against the mainstream corporate funded candidates we will get the same policies either way.

Rayn: “Do not turn to the right or the left; Turn your foot away from evil” – Míshlê [Proverbs] 4:27

Rayn: Vote for Wars of Aggression, with Crimes Against Humanity! It’s the “Lesser of Two Evils”!
http://acidrayn.com/2016/10/15/vote-for-wars-of-aggression-with-crimes-against-humanity-its-the-lesser-of-two-evils/

As I scrolled through my Facebook news feed, I discovered the following artwork here, being shared by the page, “The Abolitionist Movement,” and originally posted it to my own wall, along with commentary… 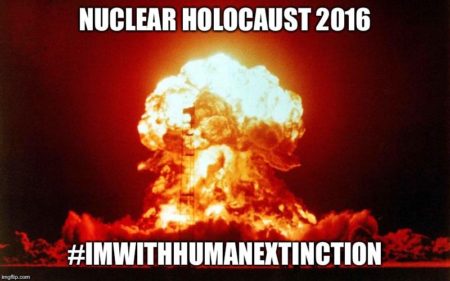 My Commentary: Democratic and Republican voters in 2016…

Yes, You Do Have an Obligation to Vote for the Lesser of Two Evils. Here’s Why.:
https://www.washingtonpost.com/news/monkey-cage/wp/2016/06/01/yes-you-do-have-an-obligation-to-vote-for-the-lesser-of-two-evils-heres-why/

(Julia Maskivker) Do we have a duty to vote for the lesser evil when election choices are equally unappealing? Alternatively, do we act rightly if we vote for a third-party candidate whom we prefer on principled grounds even if he or she stands no chance of winning?

Many people are seriously pondering these questions. Some voters believe that casting a ballot for either Donald Trump or Hillary Clinton — the likely nominees of the major parties — would compromise their moral principles in support of freedom of enterprise and greater tolerance. Many Republican voters are gravitating toward the Libertarian Party candidate, Gary Johnson, who appears to embody their political views more faithfully, yet stands no realistic chance of becoming president. In turn, some progressive Democrats are looking at the Green Party’s presidential candidate, Jill Stein, who similarly has no realistic chance of winning.

My Commentary: Ha! Media’s getting real desperate to manufacture America’s consent for another four years of war crimes, crimes against humanity, and an ever-expanding police state, within a country-sized prison.

Vacate The Vote, and Vote for Nobody! Far from being “political inaction,” “a dereliction of public duty,” or “failure to politically speak,” it is the opposite of all such claims, and stands out, historically, as one of the most real, effective and non-violent means to place a solid vote of “No Confidence” against all candidates at any given election! Withdraw Consent!

“Americans used to fight fascists, now they vote for them”