The following debate originally took place on my Facebook wall, upon my post, “Leaked Debate Agreement Shows Both Obama and Romney are Sniveling Cowards“… 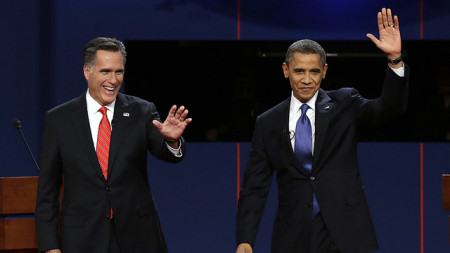 Since the Republi-‘Crats continue to agree on WAR, they have once again framed the entire presidential election around it! Meanwhile the two-party fraud colludes behind the scenes to ensure that each of their puppets are beyond reproach throughout the debates!!! As you can see, there is no need for peer review in political “science,” because TYRANNY HATES INQUIRY!

Some of the rules Obama and Romney negotiated with the Commission on Presidential Debates for: “They aren’t permitted to ask each other questions, propose pledges to each other, or walk outside a “predesignated area.” And for the town-hall-style debate tomorrow night, the audience members posing questions aren’t allowed to ask follow-ups (their mics will be cut off as soon as they get their questions out). Nor will moderator Candy Crowley.”

Brian J.: I think Obama did a great job, and beat Romney. And he did get some tough questions, and he’s managed to take responsibility for all his screw ups. Which is something that Bush and Clinton never did.

Daniel F.: The biggest problem in the last four years have been the republicans in Congress opposing every little thing that Obama tries to do and who don’t care if the country is brought to the brink of ruin so long as they can blame it on Obama and the democrats. Obama has been far from perfect, but the republicans have been FAR worse.

Brian J.: Exactly. And Obama only tries to take away our rights, and make more war, just to appeal to the republican base. He does things to please both parties, and the Republicans still don’t like him. It’s just a race thing.

Rayn: “Obama did a great job, and beat Romney,” Brian? At what? Manufacturing public consent for more war?