As I scrolled through my Facebook news feed, I discovered the following artwork here, being shared by the page, “V is for Voluntary,” and originally posted it to my own wall, along with commentary… 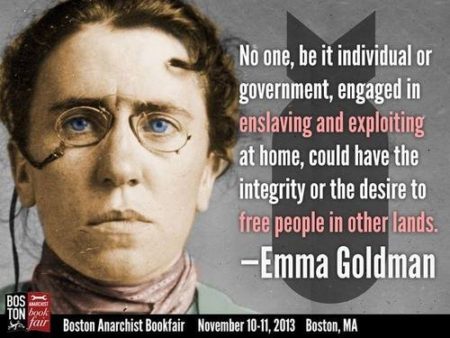 “No one, bet it individual or government, engaged in enslaving and exploiting at home, could have the integrity or teh desire to free people in other lands.” – Emma Goldmanoit

Chris C.: Listen to this track. Its the bomb. The lyrics and the whole sound, vibe

Kimberly K.: I used to listen to her… until she expressed her disdain for whitey… LMAO! Don’t care for her anymore

Chris C.: I think that was blown outta proportion, out of context…when i met her and sang for her on her bday, she was totally down to earth and respectful. no hint of racism

Chris C.: haha….i do agree with being very careful about words we put out in the universe…we were just talkin about that actually, that concept

Kezi C.: For everything that is said there are two things that are HEARD

Rayn: Indeed, words are words! With that in mind, I would love for someone to provide me with ANY evidence that Lauryn Hill has spoken of a “disdain for whitey.” I have challenged many, and YET not one person has SHOWN PROOF of this slanderous allegation! As far as I can tell, it is an INSIDIOUS RUMOR, meant to disqualify a HIGHLY POSITIVE, CONSCIOUS ARTIST whose influence was growing at the time this falsehood was propagated against her! In other words, Ms. Hill was a threat to the agenda of the cowards-that-be, and because of this, she was subsequently “neutralized”! Allow me to help clear things up (and provide some comic relief, too):

Lesson: Don’t Believe the Hype, and do your own research! Those who seek to defame others ARE BANKING on our lack of INTEREST in TRUTH, and unwillingness to CRITICALLY THINK for ourselves! We must not allow the adversary to gain any real ground in these INFOWARS! So long as we remain asleep, the PSY-OPS will continue! Believe that! Just remember: complacency is complicity!

Kezi C.: Rayn ~ I couldn’t agree more. I also worked for her and was her friend in Jersey for the time frame f 1991-1997 and her outlook wasn’t that of racism and if it was said it was misquoted in an attempt to slander her true love of the people that loved her music. She new the numbers on a business level and it would have been ludicrous to outs a group of loyal supporters just to make a radical point to … Media.

Rayn: No doubt, Kezi! And, I thank you for providing us all with a more intimate perspective of the situation. As a fan of Ms. Hill’s music since way back when the Fugees were also called the “Tranzlator Crew,” I immediately had my doubts about this circulating rumor when I heard it, as it seemed to fly in the face of YEARS worth of her song lyric content. So, I decided to investigate for myself, scouring the web for facts, and couldn’t find a single shred of evidence to support the defamatory claims – just many an angry white ex-fan, ranting in disgust! At that point, I determinded that the rumor was suspect, and likely false. I adhere to the concept that the BURDEN OF PROOF is actually on the ACCUSER, with ALL INDIVIDUALS PRESUMED INNOCENT.