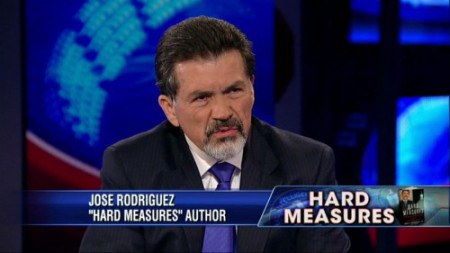 (Tom Parker) It feels like we have been here before. Another testosterone-fueled memoir from a charter member of President Bush’s torture team unapologetically seeks to justify the unjustifiable with inflated claims of attacks thwarted and secret battles won.

Latest to the plate is Jose Rodriguez, former Head of the CIA’s National Clandestine Service, and the man charged with implementing the application of enhanced interrogation techniques (EITs) to detainees that fell into the CIA’s clutches after 9/11.

Rodriguez was not always quite so willing to boast about his handiwork. In 2005 he destroyed 92 videotapes of high value detainees Abu Zubaydah and Abd al-Rahim al-Nashiri being water-boarded at secret CIA prisons in Thailand.

My Commentary: “Defends hiding evidence.” Read that a few times in a row. Critical thinking is key here. When, where and why does “evidence” typically require “hiding”? Also, what technically constitutes “criminal conspiracy”? Here’s a helpful clue: http://criminal.findlaw.com/criminal-charges/conspiracy.html