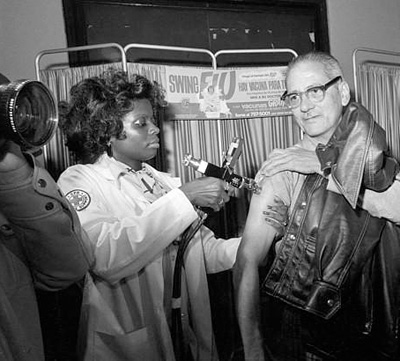 (Tony Long, Wired.com) – 1976: President Gerald Ford orders a nationwide vaccination program to prevent a swine-flu epidemic. Ford was acting on the advice of medical experts, who believed they were dealing with a virus potentially as deadly as the one that caused the 1918 Spanish influenza pandemic. The virus surfaced in February at Fort Dix, New Jersey, where 19-year-old Pvt. David Lewis told his drill instructor that he felt tired and weak, although not sick enough to skip a training hike. Lewis was dead with 24 hours. […] Mass vaccinations started in October, but within weeks reports started coming in of people developing Guillain-Barré syndrome, a paralyzing nerve disease, right after taking the shot. Within two months, 500 people were affected, and more than 30 died. Amid a rising uproar and growing public reluctance to risk the shot, federal officials abruptly canceled the program Dec. 16. (Read entire article here…)

My Commentary: America suffered from a previous outbreak of swine-flu in 1976. Interestingly, this particular outbreak began at an Army base in Fort Dix, New Jersey. The background is as follows: after a recruit died mysteriously, an autopsy was performed, & it was determined that swine-flu had caused his death. Testing began & army doctors soon realized that at least 500 soldiers were also infected, though none were ill. Under pressure from health officials, who saw a possible pandemic on their hands, then-President Gerald Ford spent $125 million funding a mass inoculation program – aimed at protecting the American public. However, within weeks, some who took the shot began to develop “Guillain-Barré syndrome, a paralyzing nerve disease. Within two months, 500 individuals were affected, and more than 30 died.” The public responded angrily, and the program was stopped.

The moral of the story: while swine-flu claimed only one victim, the vaccine claimed over 30 lives, & crippled nearly 500 individuals!!