The following debate originally took place on my Facebook wall, upon my post, “Cindy Sheehan Heads to Martha’s Vineyard to Confront Obama on the War“… 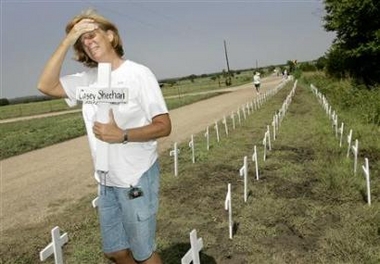 While most Americans voted President Obama into the Whitehouse with the “hope” that he would effect real “change,” by putting an end to the previous administration’s falsely-premised, highly illegal wars of aggression & occupation in the Middle East, very few individuals have been willing to take him to task for his blatant failure to make any sort of true “progress.” Then, there’s peace activist, Cindy Sheehan. Unfazed by the “right” and “left” of American politics, she bodly chooses, rather, to focus on what is “right” vs. “wrong.” With the loss of her son, Casey, to the senseless war in Iraq, she honors his memory by making it her personal mission to end our Imperial Adventures overseas, period.

During the week of August 23-30, while Obama’s vacationing @ an expensive resort on Martha’s Vineyard, Cindy will join other activists in letting him know that there’s no relaxing when peole are still dying in our wars! She’s a courageous American, a real Humanitarian & a true patriot!

Kenny C.: It is sick! How can the Commander in chief be on vacation at a resort while there is a full blown war going on with over hundred thousand brainwashed american soldiers killing innocent women and children in countries we have no business in.INSTEAD OF VACATION, WORK ON YOUR PROMISE YOU MADE, END THE WAR AND PRESERVE THE CONSTITUTION!

Rayn: As I have said before, Obama IS working on the promises he made, and all is going according to planned! Allow me to direct your attention to some of the comments he made when he was still just a candidate on the campaign trail, looking to secure American votes:

Speaking from Afghanistan in a July 20, 2008 interview on “Face the Nation,” Obama said, ”it’s time for us to withdraw some of our combat troops out of Iraq, and deploy them here in Afghanistan, and I think we have to seize that opportunity. Now’s the time for us to do it” (http://www.cbsnews.com/video/watch/?id=4275914n). Translation: MORE WAR IN AFGHANISTAN!

Speaking on August 1, 2007 in an address to the Woodrow Wilson International Center in Washington, DC, Obama stated the same exact agenda, taking it a step further: “The first step must be getting off the wrong battlefield in Iraq, and taking the fight to the terrorists in Afghanistan and Pakistan” (http://www.stripes.com/article.asp?section=104&article=58663). Translation: MORE WAR IN AFGHANISTAN! NEW ILLEGAL WAR OF AGGRESSION AGAINST PAKISTAN!

According to Obama, “if we have actionable intelligence about high-value terrorist targets and President Musharraf will not act, we will” (http://www.reuters.com/news/video?videoId=62500&newsChannel=domesticNews). Translation: NEW ILLEGAL COVERT WAR OF AGGRESSION AGAINST PAKISTAN!

Obama even went as far as saying, “we must not turn a blind eye to elections that are neither free nor fair – our goal is not simply an ally in Pakistan; it is a democratic ally” (read transcript of entire speech here: http://www.barackobama.com/2007/08/01/the_war_we_need_to_win.php) Translation: REGIME CHANGE AND NATION-BUILDING IN PAKISTAN!

In August of 2007, in an article entitled “Renewing America’s Leadership,” published in the Council on Foreign Relations’ (CFR) “Foreign Affairs” Magazine, Obama wrote, “I will not hesitate to use force, unilaterally if necessary, to protect the American people or our vital interests whenever we are attacked or imminently threatened. We must also consider using military force in circumstances beyond self-defense in order to provide for the common security that underpins global stability — to support friends, participate in stability and reconstruction operations, or confront mass atrocities” (read transcript of entire speech here: http://www.globalpolicy.org/component/content/article/153/26336.html). Translation: NEW UNPROVOKED, ILLEGAL WARS OF AGGRESSION AGAINST MIDDLE-EASTERN SOVEREIGN NATIONS!

In this same article, Obama also claimed that “we must develop a strong international coalition to prevent Iran from acquiring nuclear weapons and eliminate North Korea’s nuclear weapons program. Iran and North Korea could trigger regional arms races, creating dangerous nuclear flashpoints in the Middle East and East Asia. In confronting these threats, I will not take the military option off the table. But our first measure must be sustained, direct, and aggressive diplomacy — the kind that the Bush administration has been unable and unwilling to use.” Translation: NEW ILLEGAL WAR OF AGGRESSION AGAINST NORTH KOREA! NEW ILLEGAL WAR OF AGGRESSION AGAINST IRAN!

See what I mean? Obama was always just another Bush, hell-bend on expanding America’s wars in the Middle East. I tried to warn as many people as I could not to vote for this warmongering pig, but only a select few took the time to review my research!

But, you know what? It’s never to late to turn this slimeball into the LAME DUCK he should be! We can prevent his re-election if we spread the truth around, and let people know that they were fooled by this FALSE PEACE CANDIDATE! (Click Here to Continue Reading This Post) →